A Vegetarian in Vancouver BC: The Acorn Restaurant 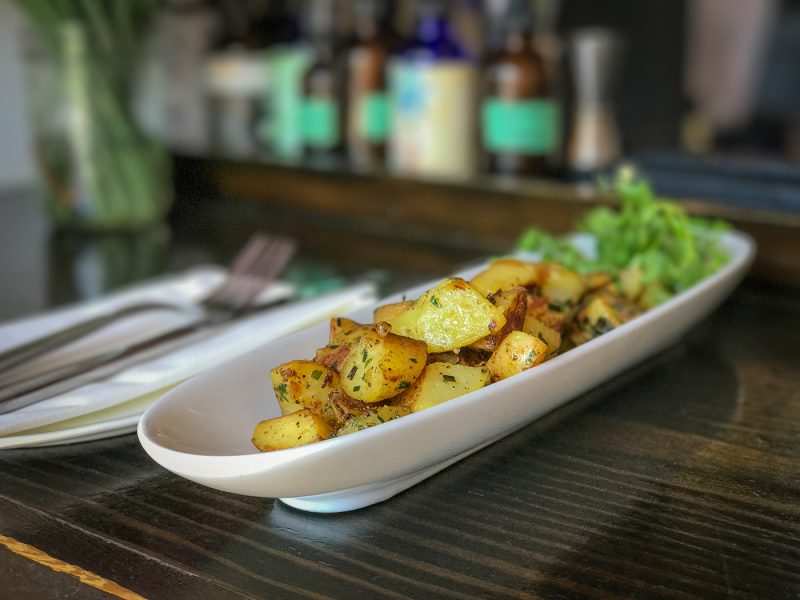 I recently started binge watching The Great British Baking Show. Now in my third season, with each episode I find I’m continually smitten. The shine has not worn off. But this post isn’t about baking, and it isn’t about British things. It’s actually about Canada. If you’re a regular reader of this blog you know I recently traveled to Vancouver BC and treated myself to a sort of 2-day plant-based eating spree. It was as wonderful as I hoped it would be and it spawned at least two restaurant review posts. My first detailed my remarkably good vegan breakfast platter at Bandidas Taqueria, and my second is today’s post about The Acorn Restaurant. 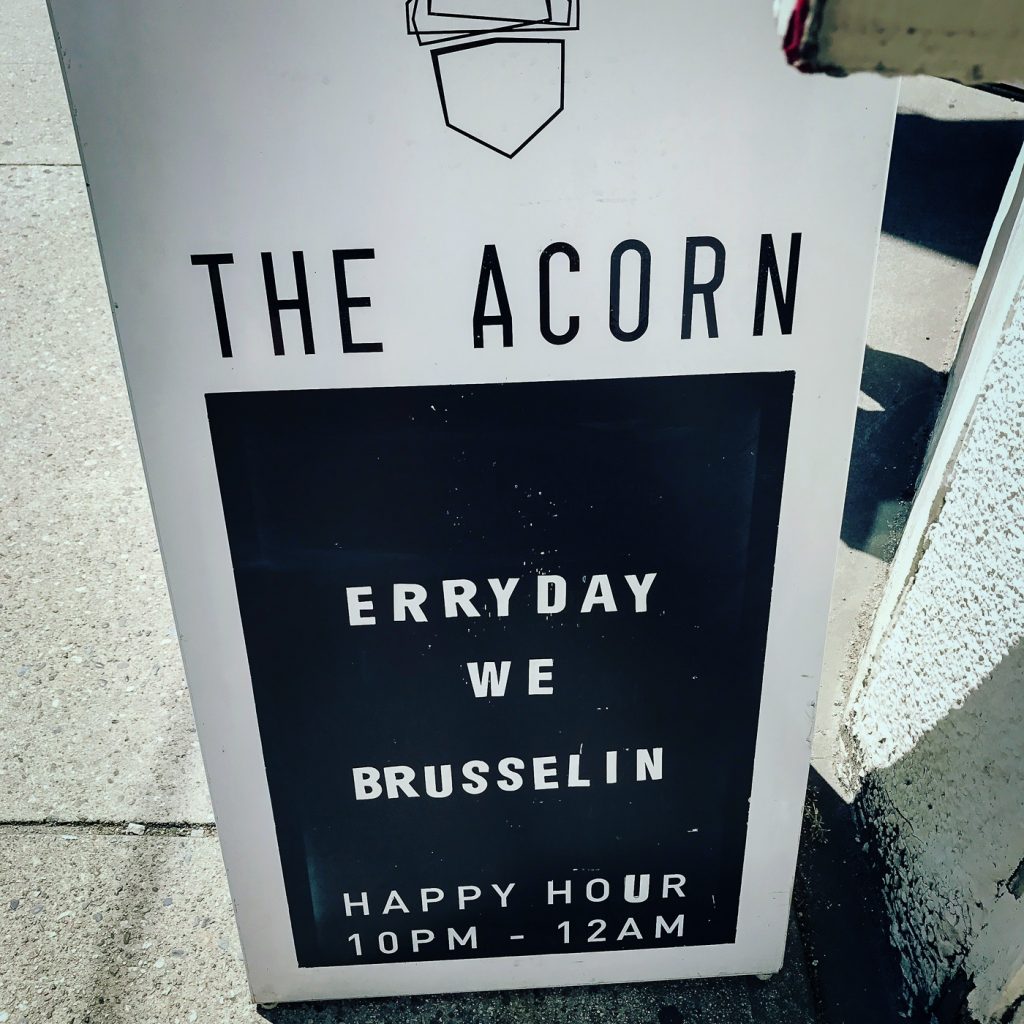 You may be wondering how Canada and Britain are connected. Well obviously, they share a sovereign; a queen. (I had to Google this. Guess what else I found out? The queen has been the proud dog mom to 30 corgis during her time on the throne. That’s my kind of woman.) In my mind, though, there is another more feeble but necessary connection. After writing countless restaurant and product reviews, I’m beginning to run short of ways to describe food. I’ve got a collection of lists of adjectives for food writers, and I often make up my own words like chocolateness. But the well has started to run dry.

Imagine my surprise and delight when I started watching judges Mary Berry and Paul Hollywood taste oftentimes 40 baked items in the course of one episode, finding unique and descriptive ways to give feedback on the bakers’ biscuits, arlettes, macarons, choux buns, puddings, and opera cakes each and every time. The best part about it is they use phrases unfamiliar to my American ear, and it’s entirely charming. So as I regale you with tales of vegetarian brunch at The Acorn Restaurant, I will borrow some of my favorite phrases from Mary and Paul, giving credit where credit is due.

As soon as I walked in the door, I realized this was a rather special restaurant. With each interaction with staff and each dish put in front of me, I was even more convinced of my initial assessment.

As a party of one, I was offered a seat at the bar. My waitperson told me about the day’s specials, including their fresh juice elixir of the day with parsley, chard, kale, green apple, cucumber, celery, basil, and lemon. She warned me that it was a “very green” green juice, but I was so in the mood. I was surprised and delighted when she brought me my very own jar of juice, and set about to filling my glass garnished with crystallized ginger. This was going to be one fancy brunch. The shape of the bottle made it feel like I was pouring liquor which is quite a foreign idea for me, and it felt a little dangerous. (Except that we’re talking about a beverage full of antioxidants. That sort of takes the edge off of the danger, doesn’t it?) Despite the greeniness, it was a popular beverage as I saw 4 more leave the bar during my stay. 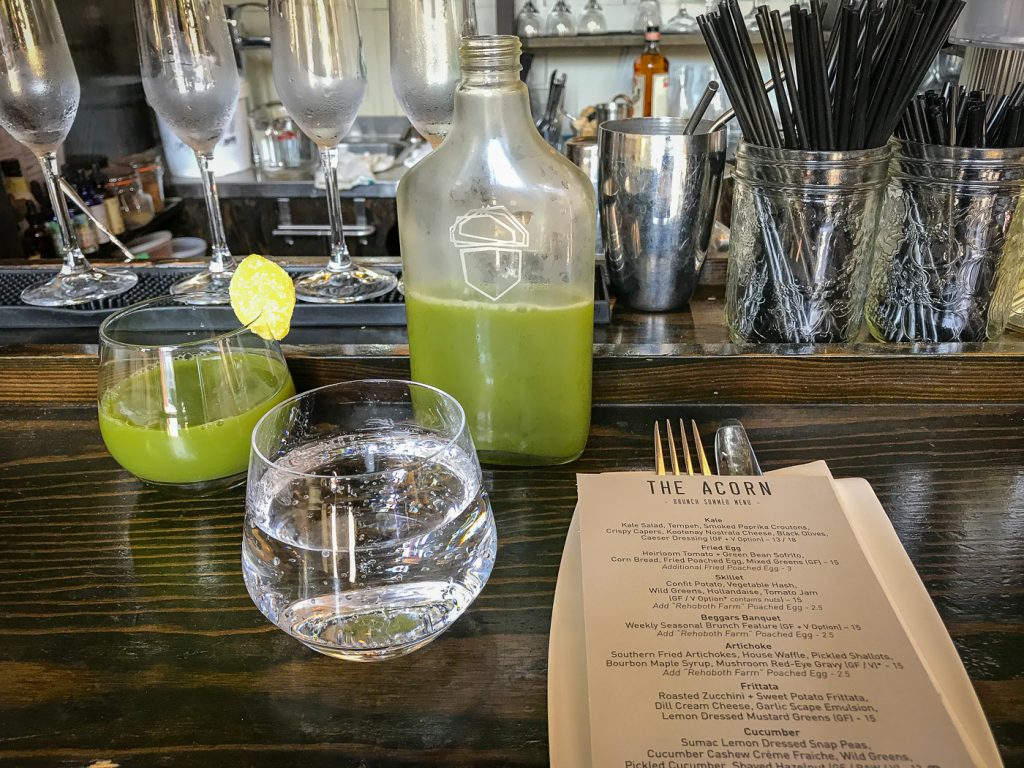 My server impressed me with her attentiveness and also her keen sensitivity to food preferences and allergies. She wanted to be sure my dietary needs were met accurately and as a dietitian, that rates highly with me when dining out. I was clearly in vegetarian/vegan/gluten free/dairy free headquarters. They call themselves a “vegetable-forward” restaurant, the sandwich boards on the sidewalk have vegetable-themed humor, and the wifi password is “halloumi.” Of course it is.

My first beautiful food delivery was unexpected because I didn’t order it: chive bread that felt like air in my mouth with fennel butter flavored with orange and cicely (also known as sweet chervil). OMG. The orange was sweet and subtle and the cicely was herbaceous and together it was magic. OK, let’s defer to Mary and Paul on this one: the flavors were stunning. 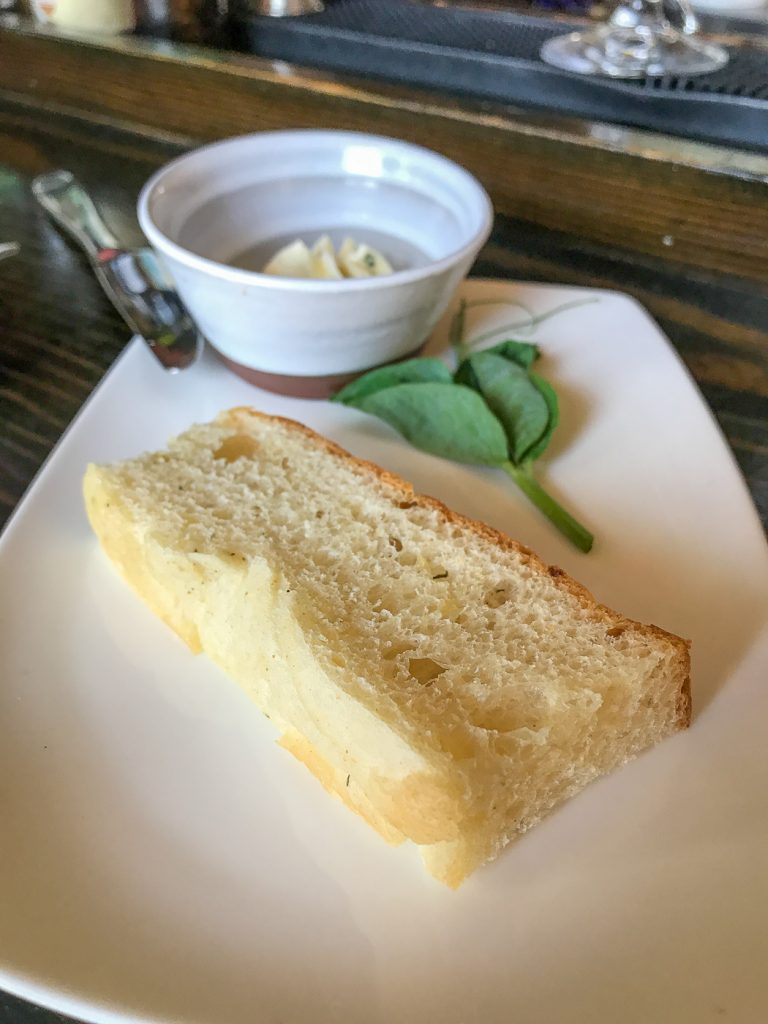 Next up? A side of Slow Cooked New Potatoes. The Yukon Golds were remarkably buttery. Remarkable because they weren’t made with butter. These nuggets (I want to be more descriptive of their shape. A quick Google search suggests they might be spherical triangles. Any geometrists out there want to set me straight?) were perfectly, boldly salted and they simply melted in my mouth. The texture was bang on, and that’s a bit of alright. 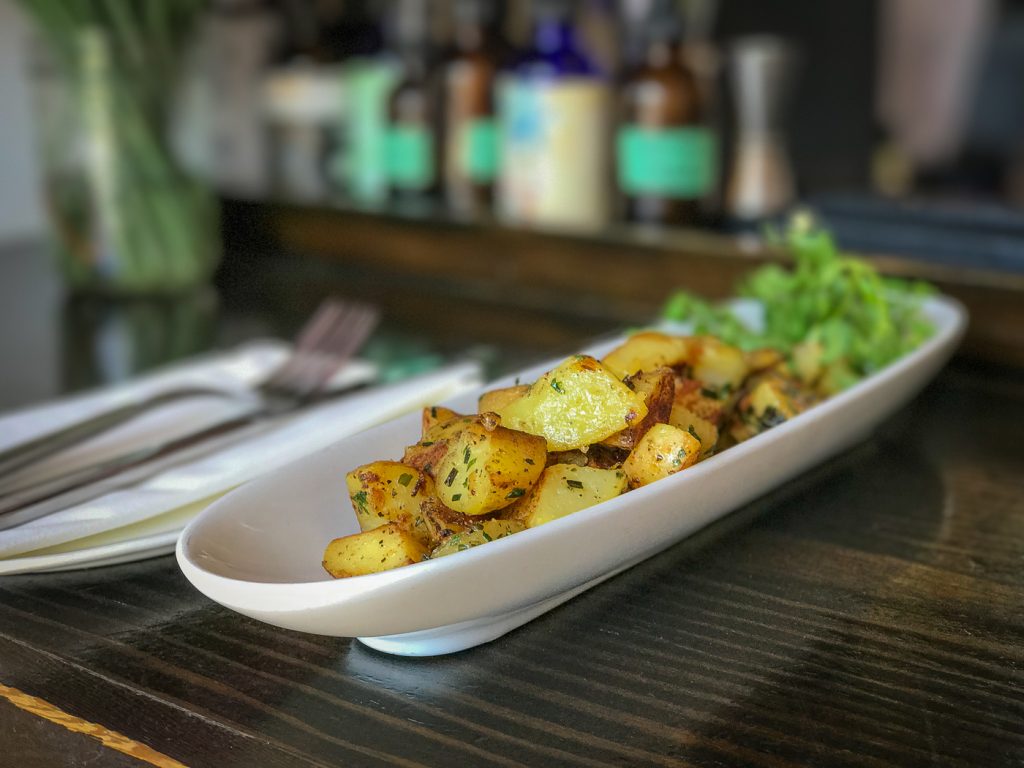 My main dish was the small Kale Salad with tempeh, smoked paprika croutons, crispy capers, Kootenay Nostrala cheese, black olives, and Caesar dressing. As I often do, I appreciated the contrast of the hot tempeh tossed with the cold lettuce. I just love that combination, so much so that I wanted more tempeh. I didn’t have quite enough to go around. There were so many strong competing flavors: briny, savory, roasty, garlicky. My palate was almost overwhelmed, so I was only able to finish half of it, but you can’t fault that. Their job was flavor, and they delivered. 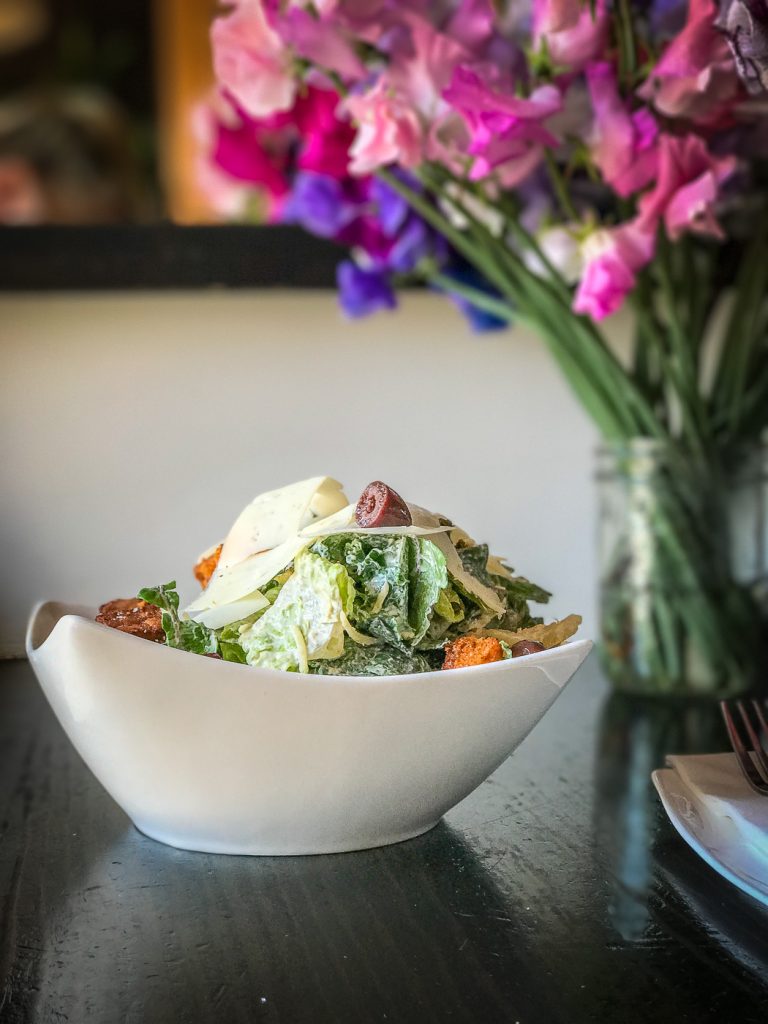 There was a little confusion about the last course. The special dessert of the day was a Seasonal Fruit Tart with rhubarb, vanilla custard, almond short crust, and cashew créme fraiche. I asked if I could take it to go, and my sweet server explained that it wouldn’t hold up well for transit. So I assumed that was all for the better in terms of my caloric intake and awaited my check. Soon enough she showed up with a plated fruit tart, assuming I’d decided to eat it before I left, and I must say I felt obliged to eat it before I left. I couldn’t wait to tuck in to that. 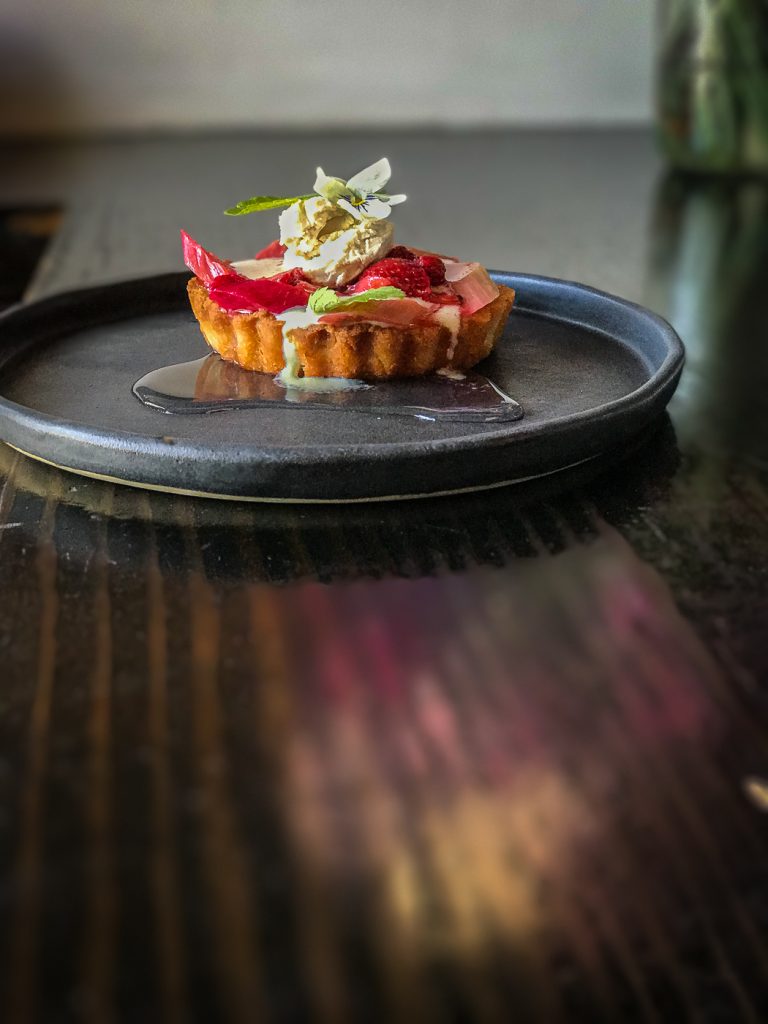 The almond crust was perfect, with just the right amount of chewy and flaky. As they’d say in the Great British Baking Show tent, that’s a good bake. The vegan custard was velvety, and the créme fraiche was rich and thick. The clear syrup on the bottom? Tart and sweet agave rhubarb syrup. It all came together as one big explosion in the mouth. 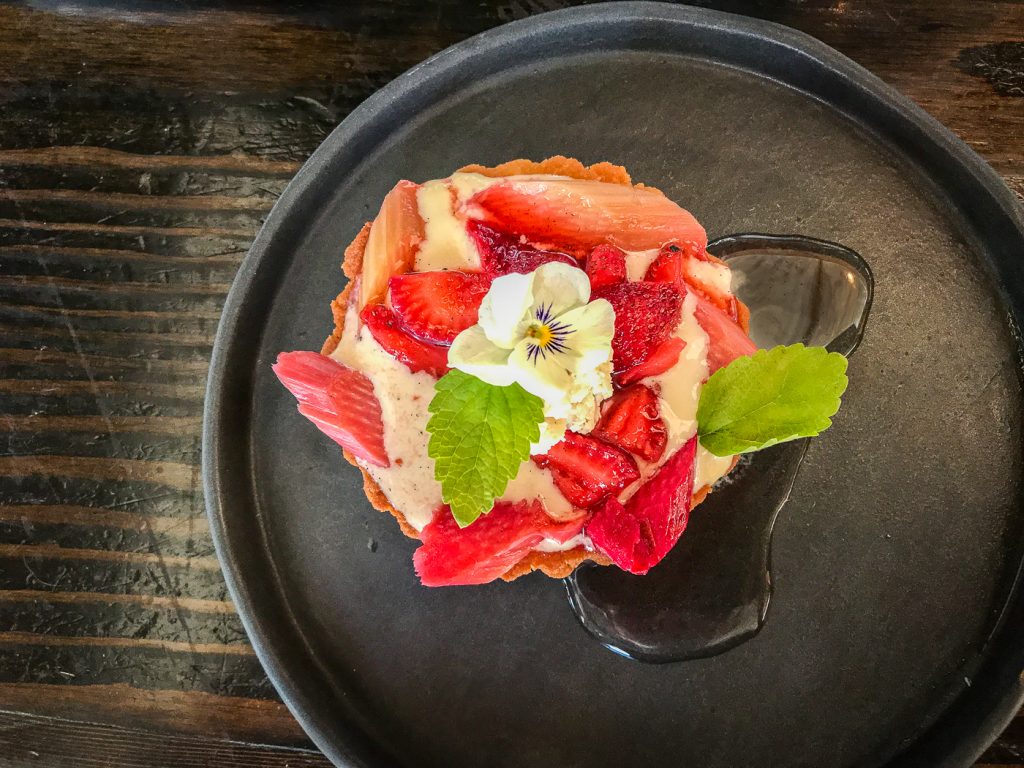 The brunch was so pleasant. I felt taken care of, relaxed, and nourished. The cost reflected this, of course. It wasn’t cheap but it was my last big hurrah before I headed back to the states and back to real life and back to binge watching other people bake stuff. I can’t wait to start the next season. Jolly good!

What are your favorite exclamations from Mary and Paul? There were so many I couldn’t fit them all in to this post. Here are my bonus phrases…Scrummy! Lovely flavor! Soggy bottom! Spot on! That’s a cracking Welsh pud! (This is the informal British word for pudding. If you have nothing better to do, check out the word origin and history for pud. It’s a little saucy!)