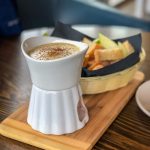 Sometimes when I’m writing a blog post (OK, most of the time) I wonder if anyone will ever read it, besides maybe my mom and my best friend. They’re subscribers, so it’s going to show up in their inbox whether they like it or not. And I suppose they feel some sort of personal connection with me which might make them more than casually interested in my latest culinary advice or adventures.

Every once in a while a post will surprise me by getting more than 2 views. It’s usually a review of a national company like Hello Fresh with possible wide appeal. Today’s post, however, is targeting a much smaller audience. I want to tell you about an amazing vegetarian meal we had high above Howe Sound near Squamish, BC. But after crunching the numbers, I think this post might be of interest to about 6,000 people in the U.S., 4 or 5 of which actually visit this site. (If we use the latest estimate from the Vegetarian Resource Group that 3.3% of Americans are vegetarians and the estimate that 200,000-300,000 people annually will ride the Sea to Sky Gondola 2900 feet to the top and possibly eat at The Summit Eatery and Edge Bar, my reach is pretty limited. If we consider that 8% of Canadians identify themselves as vegetarian or mostly vegetarian, things start to look a little better or we estimate how many Americans cross the border to travel to Squamish…my brain gives up from data analysis overload.) 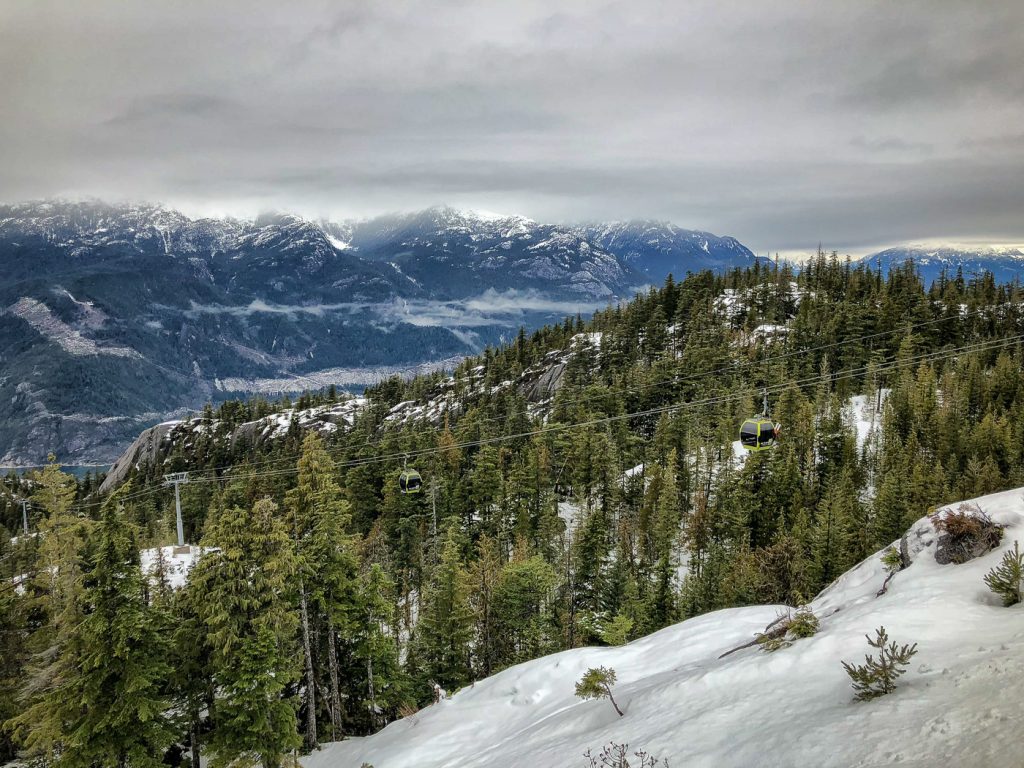 Small audience or large, remote destination or not, I’m here to tell you food at the top is hot, runny, and spectacular; I’m talking about fondue. I’m not sure if it’s a universal alpine fantasy to spend a cold day swooshing down the Alps, retiring to the lodge to sip warm beverages and dab bread into pots of melty Swiss cheese, wearing a jaunty wool sweater, while sitting by a crackling fire, or if it’s just me. However, that would require a trip to Switzerland and an ability to ski, neither of which is foreseeably in my future. So I found myself quite content to snowshoe a couple of miles around the Wonderland Lake Loop, retire to the Summit Lodge to sip Dasani Sparkling Water and dab bread into a pot of melty Canadian cheese, wearing a Gap hoodie, while sitting by a crackling wood stove. 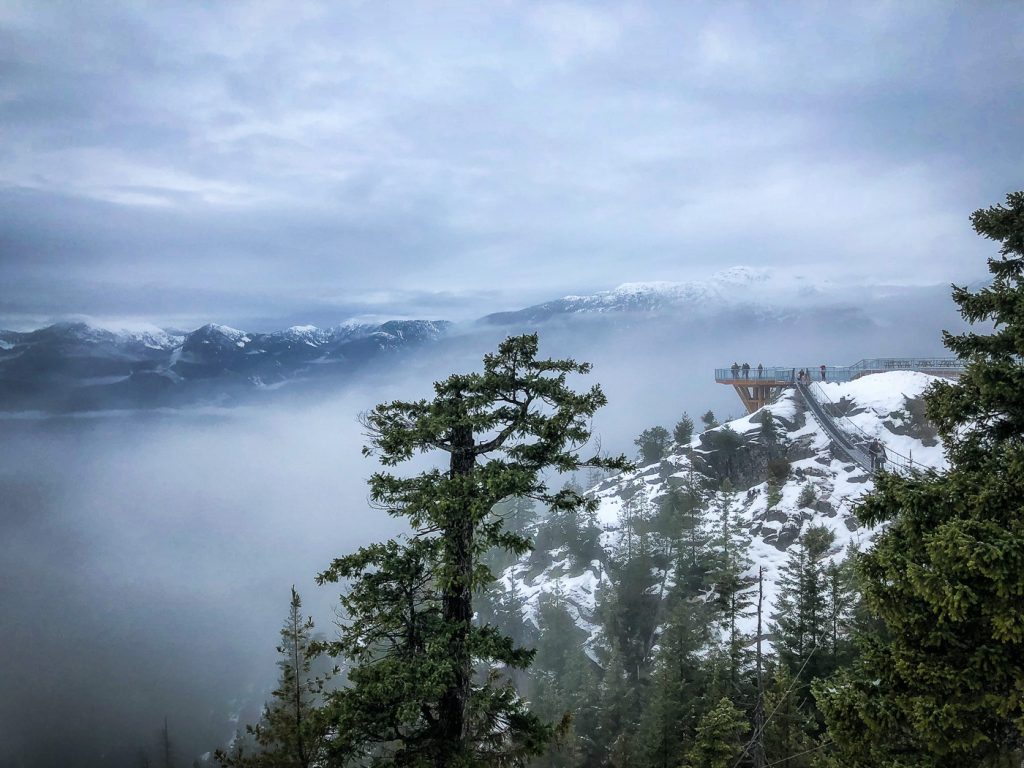 The ambiance was peaceful and mountainous and cozy. 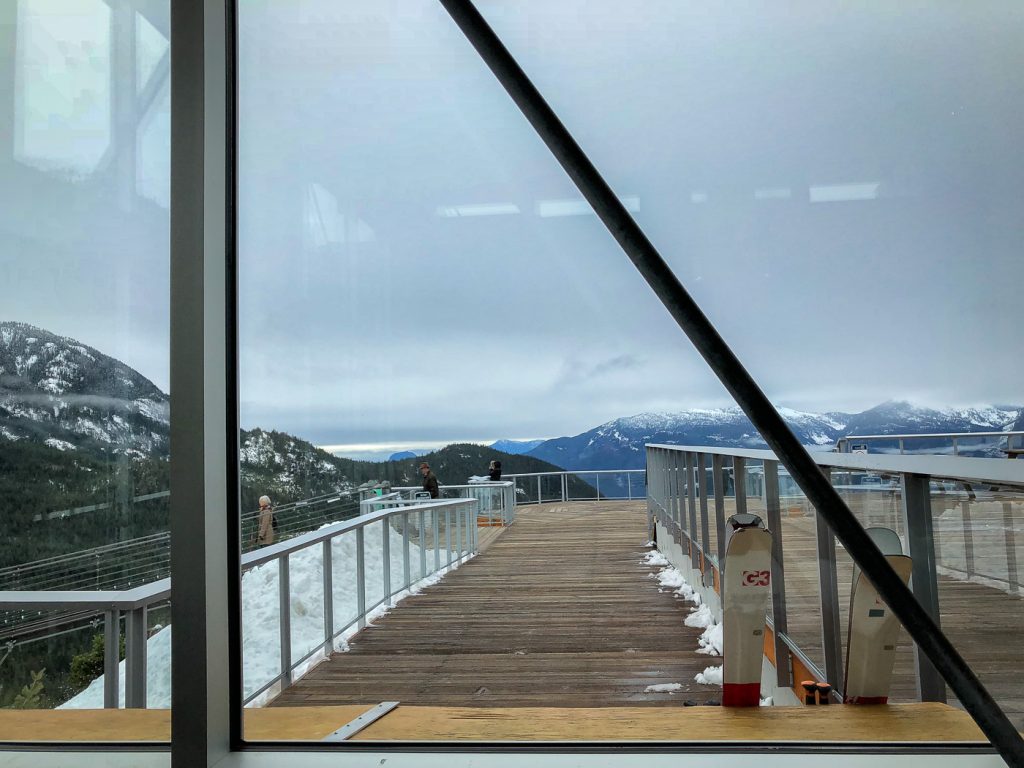 And the view was stunning. 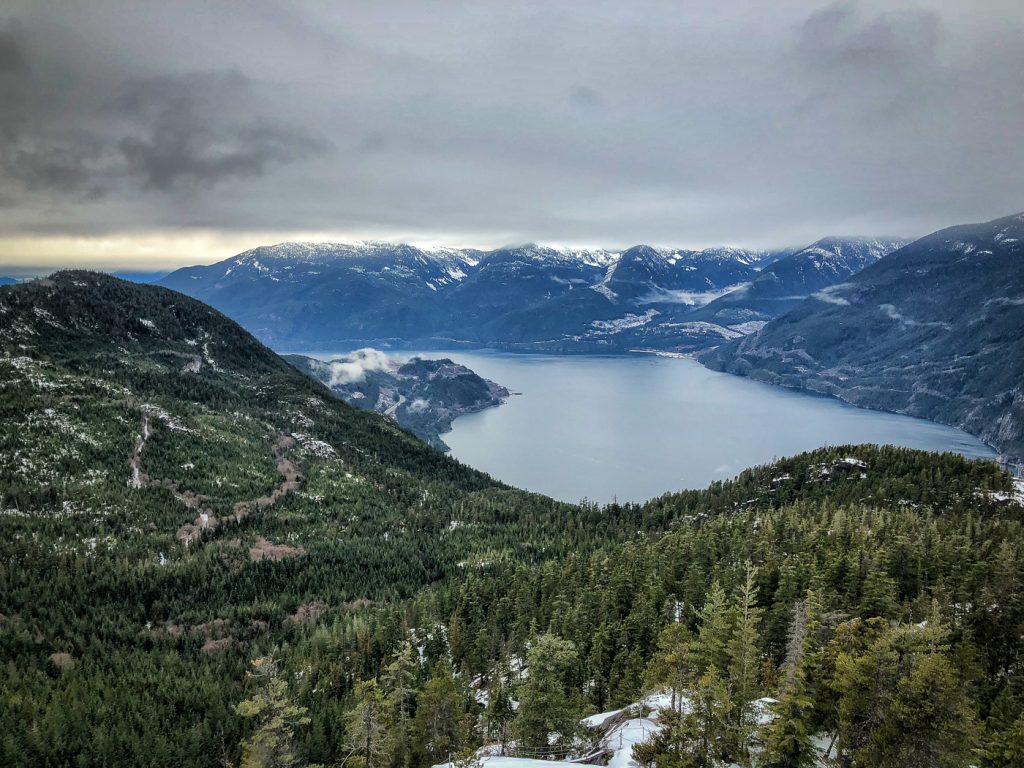 The fondue menu at The Summit Eatery and Eagle Bar is surprisingly extensive, offering 5 cheese fondues and one chocolate. We opted for the Quebecoise Fondue made with Oka cheese, old cheddar, and Blanche de Chambly beer, despite the fact that we couldn’t pronounce it correctly and that we asked for it before the supposed 2:00 pm start noted on the menu. The other two apparently vegetarian choices were traditional Swiss or Italian Fondue.

Ours came with tart apple slices and bread that had a slightly dry exterior, like it had been left out overnight; in other words, stale in the best way and perfect for holding a glob of molten cheese. The pieces were a bit too big to eat daintily, but I was in a ski lodge after all and I was cold and hungry. Dainty wasn’t my priority. 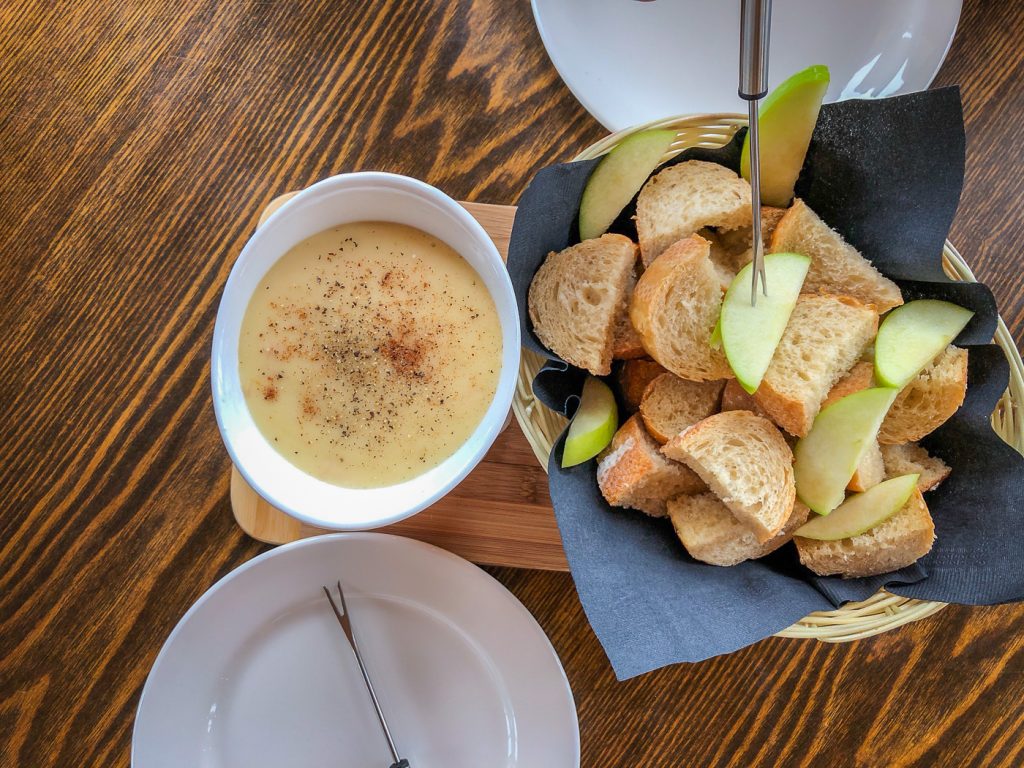 As soon as they set down our tiny fondue pot I was hit by the heavenly smell. Pungent is too strong a word. It was less intense than that, but so enticing. The surface of the cheese was sprinkled with nutmeg and pepper which added to the aroma. But the flavor! The flavor was unreal. The cheese “bite” was impeccably balanced for flavor and the thickness was ideal for dipping. It may be the most delicious fondue I’ve ever experienced. I can tell you I was sad when it was finished, and I would have ordered seconds if I didn’t already have a chocolate fondue on the way. 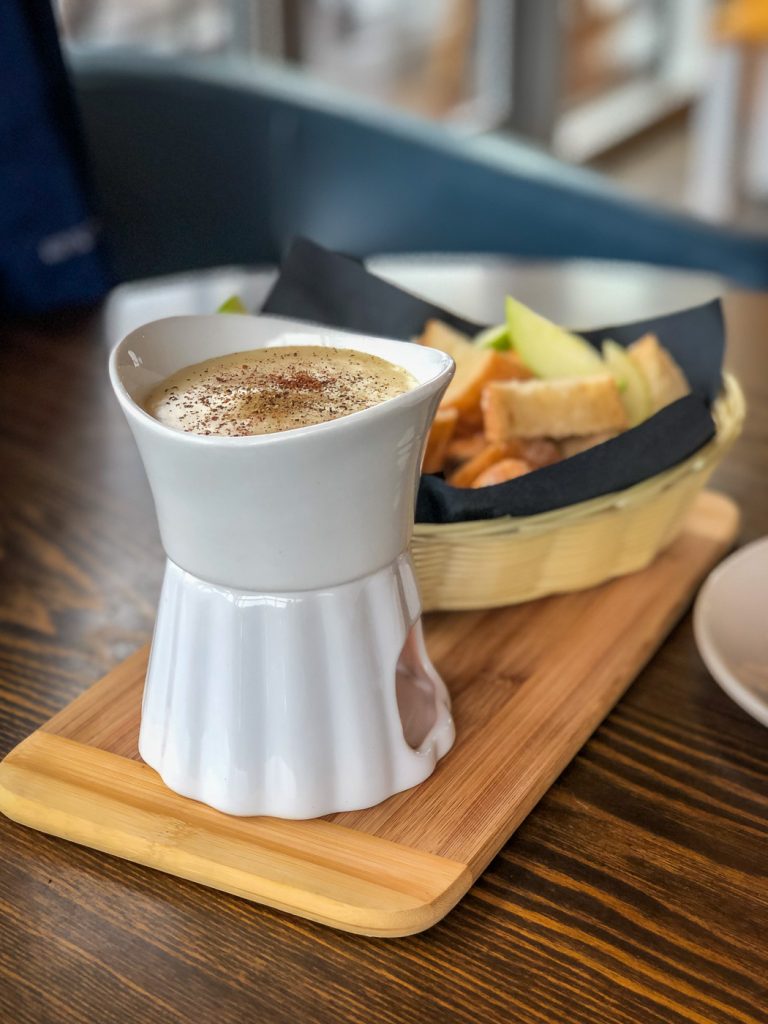 One thing I’d do differently next time is to take advantage of the “add assorted vegetables.” For a mere $5 they bring you a small plate of steamed cauliflower, carrot, broccoli, and potatoes to add variety, not to mention nutrition!

They waited until we polished off the first fondue before bringing the second fondue, like separate courses in a fancy restaurant. The dessert fondue tasted to me like very dark chocolate which was rich and bitter and sweet and smooth. The very best dipping options were the strawberries and the (unexpected and unusual) husk cherries. The fruit’s sweet/tart moist flesh paired wonderfully with the chocolate. 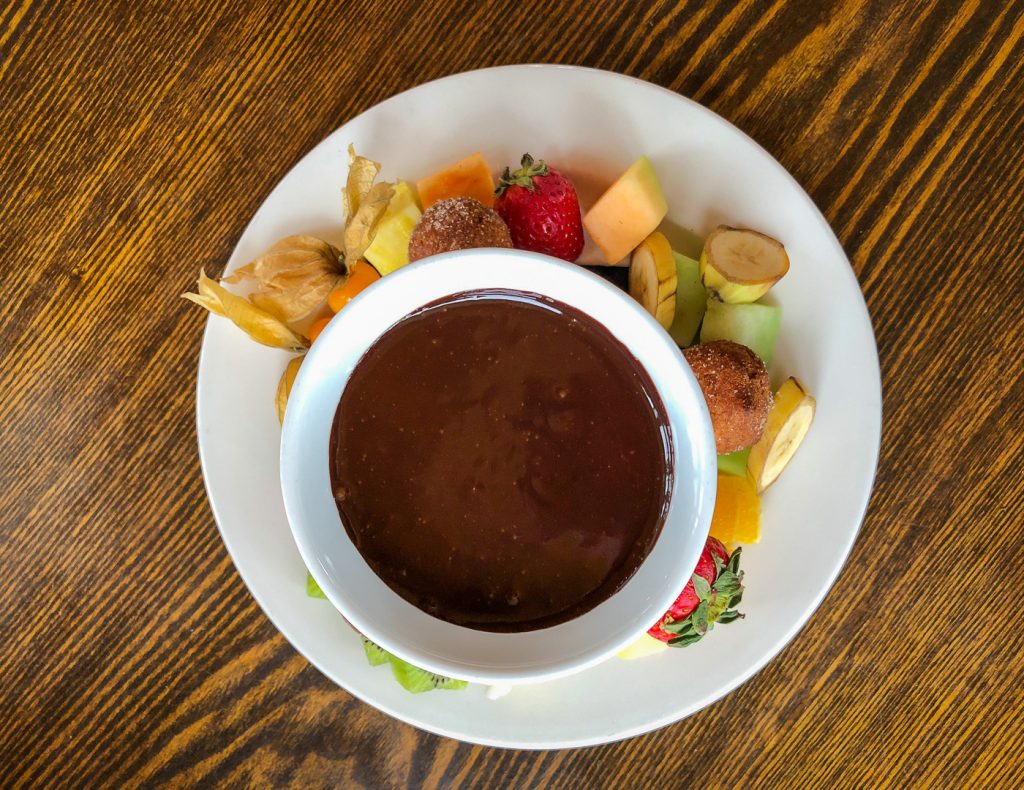 There were also banana slices, donut holes, oranges, honeydew, and cantaloupe. We quickly ran out of dippables, but we didn’t want to waste a drop of the remaining chocolate. So I headed over to the Co-Pilot Cafe next door and picked up an apple and a cinnamon bun, both of which made for decadent dipping once cut into manageable pieces. When the server returned to take away our dishes, she noticed the additions and said with a smile, “I’ve never seen anyone do that before. I like your style.” (Did she mean hedonistic yet industrious food nerd style?) 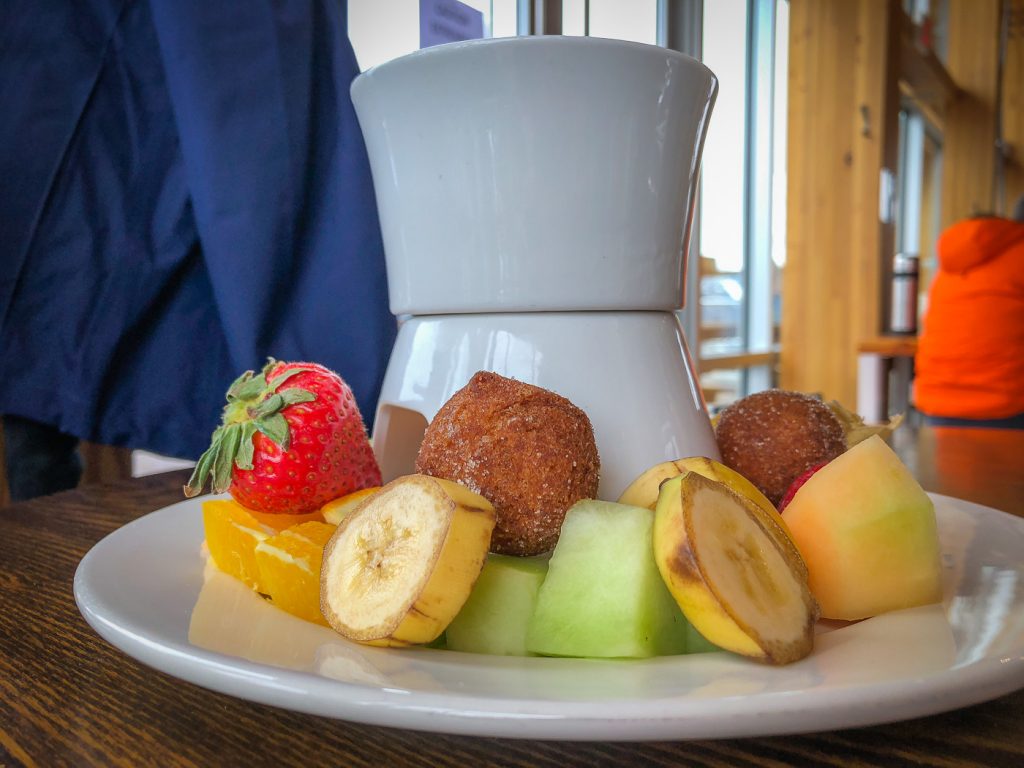 So for the potentially 6 of you reading this (I’m feeling optimistic), I don’t know if you’ll ever make it to Canada, or British Columbia, or Squamish, or to the top of the Sea to Sky Gondola. But if you do, you’ll be rewarded with fine vegetarian fondue in an unbelievably beautiful setting that will delight your taste buds. I promise. Maybe you’ll even run into my mom or my best friend.

Do you have a remote culinary destination to recommend? Where it’s absolutely worth making the extra effort to get there?