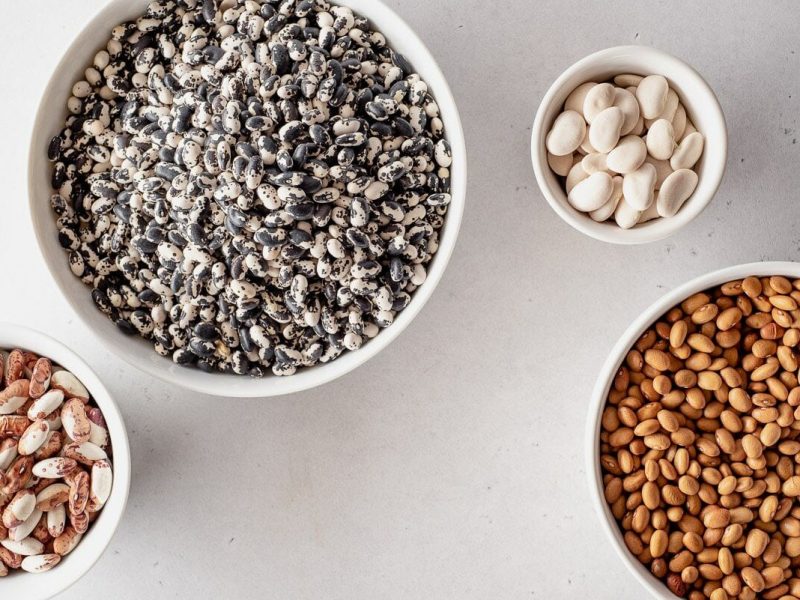 Three years of patience paid off. On May 24, 2022, I received a thrilling email that I’d forgotten I was waiting for. They were finally opening up new spots! I had the opportunity to move off the Rancho Gordo Bean Club Waiting List into the actual club, but only if I acted quickly. And act I did, without hesitation, lest I lose my precious chance. 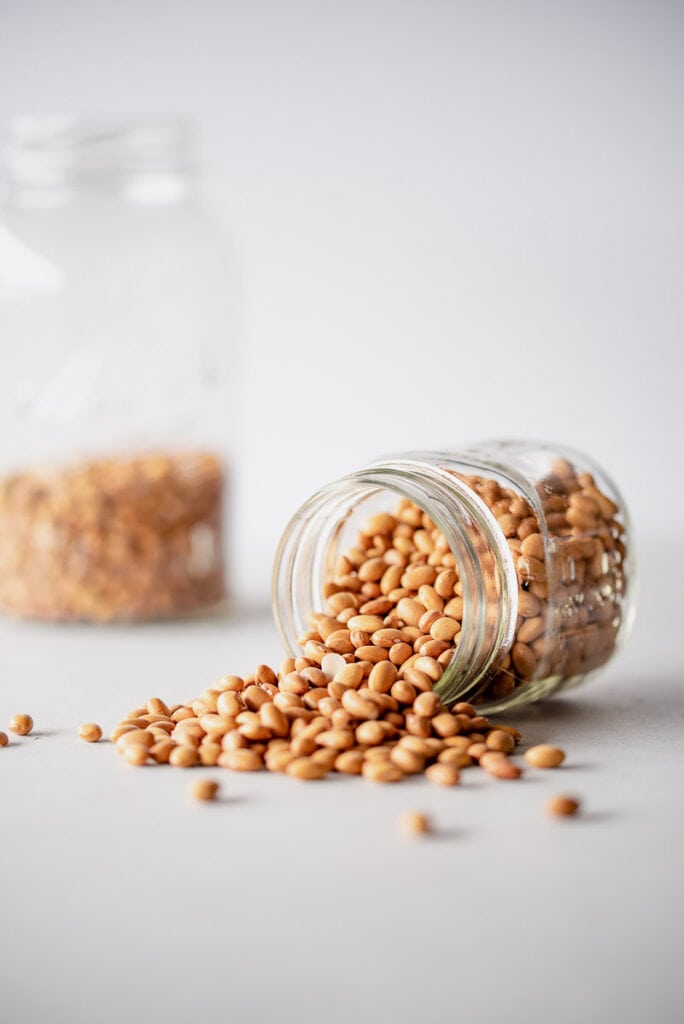 You may be thinking:

What in the world is a bean club?

Who joins a bean club?

I’m quite happy to talk about beans any time to anyone who will listen, which now includes sharing details about my membership in this exclusive club. So let’s get your questions answered. 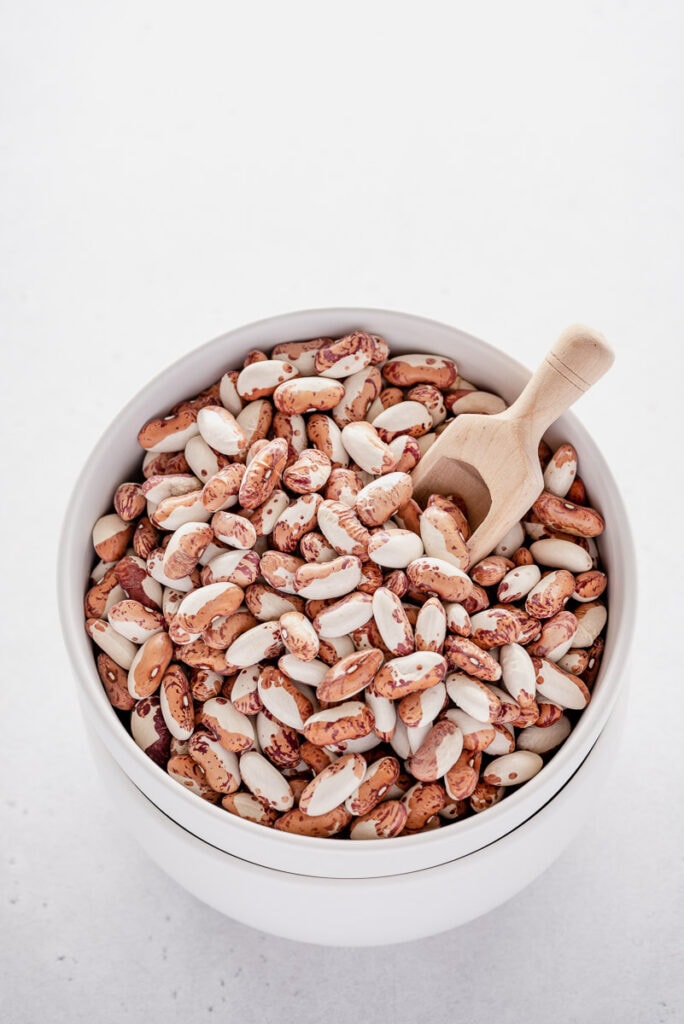 What is a bean club?

The Rancho Gordo Bean Club is a fun and fascinating way of obtaining groceries for a special kind of food nerd: legume lovers, or as the company calls us, “bean freaks.” And with over 10,000 people in the club, there are a lot of us letting our bean freak flag fly.

Members receive four shipments a year. So when I got the email alert and signed up, I paid my first $49.95 which made my membership official and covered the cost of my first box. It told me the item I was purchasing was “Rancho Gordo Bean Club auto-renew.” There is no additional cost for shipping unless you upgrade to premium shipping for an extra $9.00 which gets it to you a little faster.

The shipments include 6 bags of beans (1 pound each) plus a grain or other product from the company, which they call a “treat.” I’ve received two boxes so far shipped June 1 and August 16, and my treats were large bottles of Mexican oregano and chili powder.

In the first box I received these beautiful heirloom beans (pictured throughout this post): 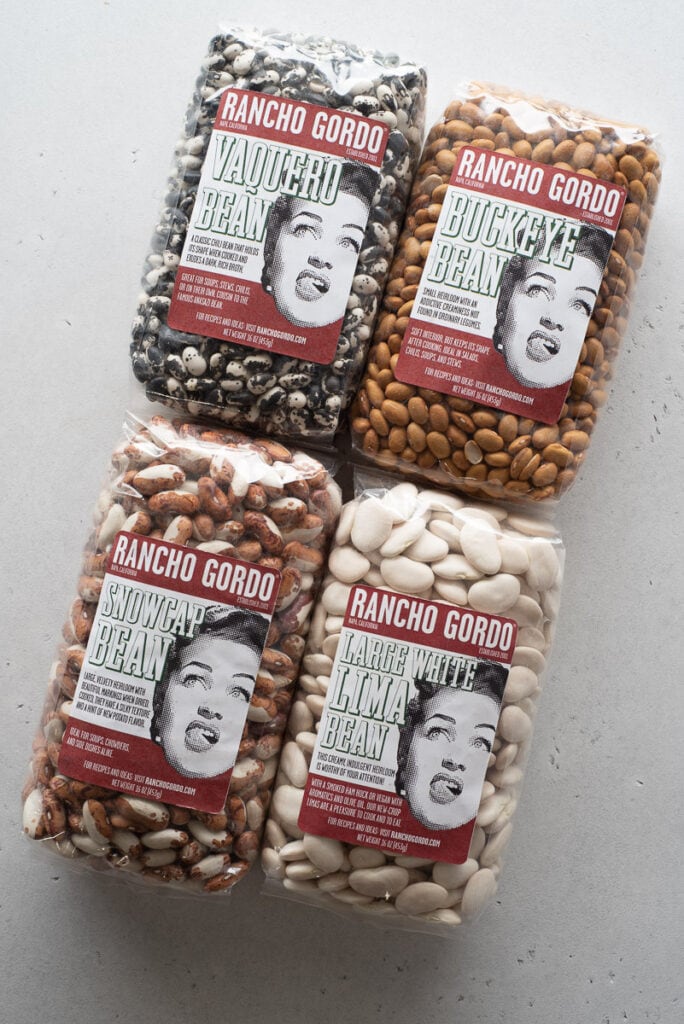 In my second box I received:

There are club other perks too, like free shipping on other orders, discounts to attend special events at Rancho Gordo, and a recipe-packed newsletter with each club shipment.

You get an email reminder when a shipment date is approaching, you can drop out of the club at any time, but you can’t skip a shipment or request a substitution in your box. And, unfortunately, while you can place regular orders from a special site for shipment to Canada, a note on the Bean Club order page says this special subscription box of beans isn’t available for our neighbors to the north.

Who joins a bean club?

I’m not sure. All I can really vouch for is maybe dietitians since I am one and I was giddy about joining.

There is a private Facebook group for like-minded bean enthusiasts called Rancho Gordo Bean Club Members with 6,600 members. Lucky for me, vegetarian and vegan recipes are commonly shared here.

It’s also exciting to get a box in the mail full of food that you didn’t pick out yourself because the contents are a surprise. A common refrain among club members is that when the Rancho Gordo box arrives on your doorstep, it feels like Christmas morning. You have to be careful navigating the Facebook group once a shipment goes out, because some members share what’s in the boxes as they’re received. It helps those of us impatient types who find the 3-5 day wait after the shipping notification excruciating and just want to know already.

According to the San Francisco Chronicle there are 11,000 people in the club. So, the answer to this question is me plus 10,999 other bean eaters. 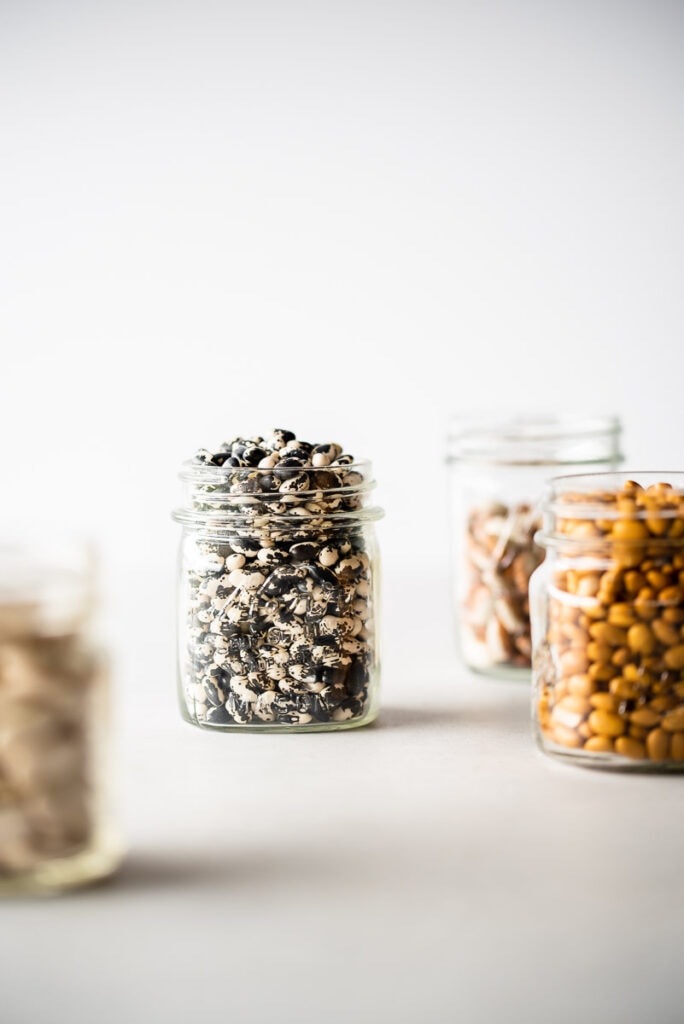 I suppose it feels special to get a spot in the bean club, but I can’t explain why. The owner of the company, Steve Sando, has stated that he isn’t intentionally trying to reduce supply to artificially increase demand. He would prefer it didn’t have an air of exclusivity around it, but it’s a simple matter of resources. They need enough of a single kind of bean to fill all 11,000 boxes and enough person-power to handle packaging and shipping.

The reality of the Rancho Gordo Bean Club waiting list is that you forget you even put yourself on the list; at least I did. As of March 2022, the San Francisco Chronicle noted there were 40,000 people on the waiting list. And when I was offered membership, I was in a group of “several thousand,” many of whom had waited four years for spots to open.

The pandemic and associated interest in cooking from scratch pumped up interest, and the Napa-based company is trying to respond. They’re hoping to expand the club to 20,000, or almost double, by this fall.

For me, it’s the way they look. I consider the unique colors, shapes, and sizes of these beans absolutely beautiful. But that’s just me.

The Rancho Gordo website notes that heirloom bean varieties are often harder to grow and the plants provide a smaller yield, but they are exceptional in terms of flavor and texture. They source their lovely legumes from farms in California, Washington, Oregon, New Mexico, and Mexico.

Are Rancho Gordo beans worth it?

For me, the answer is yes: these beans are worth it. Whenever I get a shipment, I get excited about finding time in the kitchen to make a new recipe. Having beans delivered to the house also sort of forces me to eat more beans, because I know they’re paid for and I want to use them up. (Sort of like when you sign up for a CSA and find yourself eating a lot more beets.)

Another reason that influences most people to seek out these beans is quality. I’ve seen Rancho Gordo beans described as freshly dried, and this gets talked about a lot by the folks in the Facebook group. This gives them a bit of an advantage over say, dry beans from the grocery store. This freshness seems to reduce cooking time and improve the overall quality of the cooked bean, which are both key for people who regularly cook and consume beans.

Heck, yah. Nutritionally, they’re a superstar food and everyone can benefit from their protein, fiber, and iron, not just vegetarians and vegans. The research is pretty clear. Bean intake is associated with lower risk of cardiovascular disease, diabetes, obesity, and cancer. That’s a significant list of benefits for adding just one kind of food to your plate more often.

What are some tried and true bean recipes?

You may be wondering what on earth to make with beans at all, let alone when you get 6 pounds at once. I’ve definitely had to intentionally ramp up my effort to find good recipes and get bean dishes onto my menu plan each week.

Since June, I’ve cooked and eaten a lot of beans. I can tell you these two recipes stand out above the rest:

Flavored with dark beer and dark chocolate, these were so decadent. They were almost like dessert! The original recipe I’ve linked here calls for Mexican Chocolate, but her cookbook version (called Chocolate Turtle Beans in Heidi Swanson’s Super Natural Cooking) uses chili-infused chocolate instead. As a person with a sensitive palate that avoids spicy foods, I opted for Ghiradelli 60% chocolate chips and was so satisfied. I used Vaquero beans.

This pot of beans gets its depth of flavor from beer, coffee, and…bacon. I left out the bacon of course, so sauteed the onions in olive oil instead of bacon fat, and then opted for fire-roasted tomatoes instead of regular to bring a little extra smokey flavor. I used Buckeye beans, and the finished product, topped with shredded sharp cheddar, was an absolutely perfect foil to honey-slathered cornbread. And you can bet your bottom dollar I posted pictures of my successful bean creation to the Facebook group.

If you need even more bean inspiration, I’ve got some delicious bean recipes of my own you could take a gander at. They call for canned beans, which are nice to start with if beans aren’t commonplace in your kitchen already. But, with any recipe that calls for canned beans, you can cook your own from scratch as a substitute. Typically, the equivalent would be 1 can of beans is equal to about 1 1/2 or 2 cups of cooked beans.

Hearty Red and Green Rice and Beans with Pesto 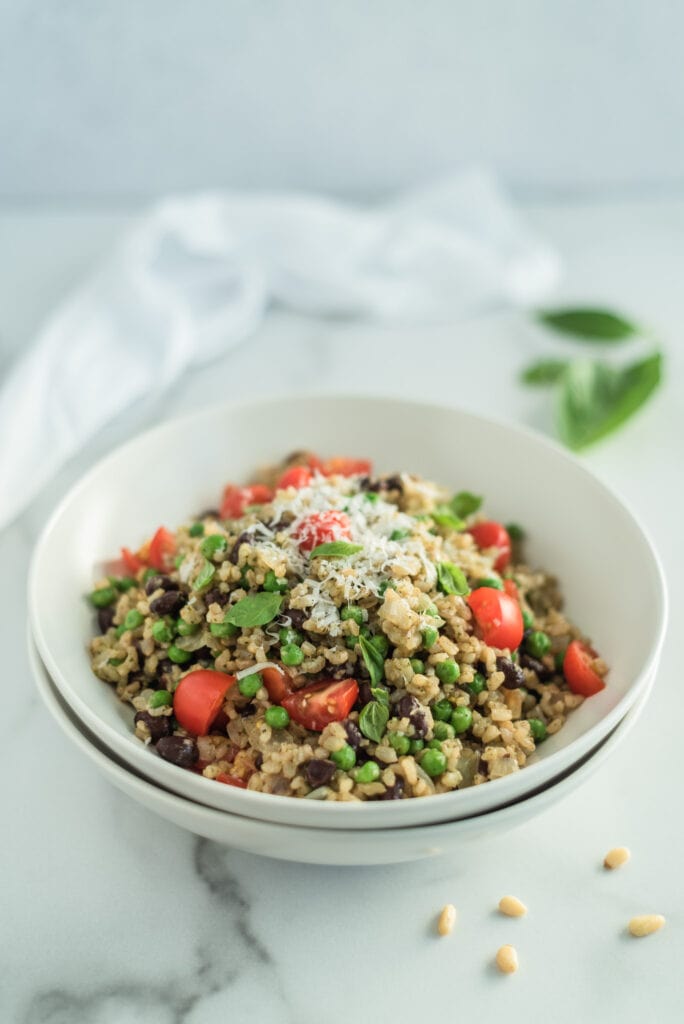 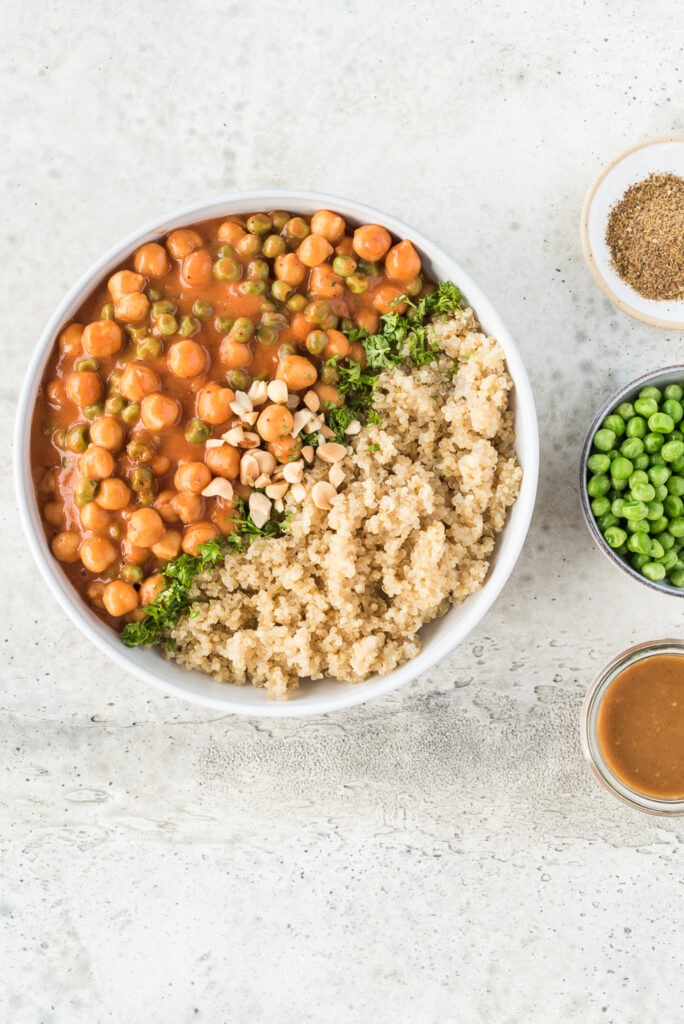 How do I cook beans?

I think cooking dry beans from scratch feels intimidating for most people. But it’s actually straightforward and once you get the hang of it, there’s a chance you might get hooked like the rest of us legume lovers. Here are the basic instructions for Cooking Beans in the Rancho Gordo Manner.

A couple of cooking notes unique to these beans:

Many members of the Facebook group shy away from using an Instant Pot for Rancho Gordo beans in particular. The company provides a chart of cooking times for pressure cooking beans and there are plenty of other references online but most folks say it’s easy to end up with overcooked beans, so they err on the side of shorter times in the Instant Pot. I can confirm that on my first attempt ever at cooking RG beans this way, I pretty much ended up with white mush instead of individually cooked beans. Again, I think the freshness is the issue here, and you can successfully use the Instant Pot if you cut back the overall time by a few minutes.

Many seasoned Rancho Gordo bean aficionados also have strong preferences regarding soaking beans before cooking. While many dried beans benefit from soaking, the thought is that because these extra special beans are freshly dried, they don’t need a pre-soak. I’m guessing after I’ve cooked all 12 pounds, I’ll have some strong leanings of my own.

Another seemingly tiny bean-cooking detail you might consider: the article Should I Salt My Bean-Cooking Water rocked my world. After completing an experiment of his own, the author concluded that we should be salting the soaking water and the cooking water, which are not common practices. I tried his method for my Chocolate Calypso Beans and was quite happy with the result.

If any of this bean business sounds interesting or appetizing, I’d say get yourself on the waiting list and practice being patient. If you’re not interested in that kind of bean commitment, consider grabbing some dry or canned beans the next time you’re at the store and doing a little experimenting of your own. With their stellar nutrition profile, incredible versatility, and outstanding flavor, trust me, it’s easy to become a bean freak.

This is not a sponsored post. I am a proud member of the club and happily pay $49.95 for each quarterly shipment myself.

4 thoughts on “Worth It? Rancho Gordo Bean Club Waiting List”