How To Prioritize Your Organic Dollars 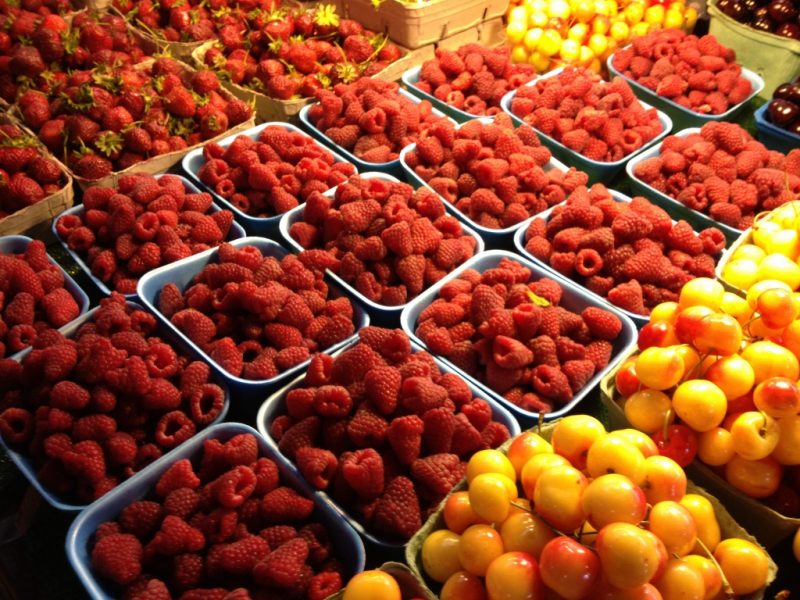 Yakima is in the center of Washington State and it is a center of agriculture.  Apples and hops keep the local economy afloat, but plenty of other vegetables and fruits are produced by this valley as well.   I suppose you could say it produced yours truly, too, since Yakima happens to be where I grew up.  I was home visiting my parents recently, and I had an experience that made me consider more closely the issue of buying organic.

I was out for a morning walk in the cool June air.  It wasn’t yet the blazing 88 that was predicted.  I noticed a buzzing sound, sort of like a loud lawn mower.  As I got closer to a newly planted apple orchard, I realized the sound was coming from a machine being pulled through the rows with a tractor.  When the driver noticed me on the other side of the street, he stopped about 30 feet from the edge of the trees.  In just a few moments, before I knew what was happening, a white cloud that had been trailing him began drifting towards me.  I felt moist droplets on my face and hands for just an instant, and suddenly and sickeningly understood that I’d been showered with pesticides.  (His hazmat suit should’ve tipped me off sooner, but sometimes I’m a little slow on the uptake.)  I was home within 10 minutes and quickly hopped in the shower to rinse off and stuck my clothes in the laundry.

Now it’s a few days later, and after having done a bit of research, I believe the machine was an air blast sprayer.  And, there’s a name for what I experienced:  pesticide drift.  Yuck.

Intellectually, I know that most of the fresh produce we eat is sprayed with insecticides and the like, but to actually see it happening right in front of me made it exceedingly real; and hard to forget.  Going forward, it’s going to be trickier for me to separate in my mind the fruit at the grocery store with its sordid past.

So, should we buy organic or not?  It’s not actually more nutritious, but I never thought that was the argument anyway.  It’s just better for us, farmers and agricultural workers, and for the environment to minimize exposure to harmful chemicals.

The most common complaint about organic is the cost.  If you can go all organic, all the time, more power to you.  It’s just fabulous all around.  But, if you’re carefully weighing the pros and cons against your food budget, I have a handy tool for you:

It helps prioritize where to put your organic dollars, and includes two lists:  The Dirty Dozen and the Clean Fifteen.  The Dirty Dozen are what you’d expect:  the dirtiest of the bunch in terms of pesticides.  It makes sense to buy these organic when affordable and available.  The list is regularly updated and commonly includes potatoes, apples, and berries.  The Clean Fifteen are lowest in pesticide residues, so you can let yourself off the hook and buy conventional corn, onions, and mushrooms, for example.  Both lists come together in a PDF that you can print out and keep with your grocery list.  (In terms of bang for your buck, you can make an argument for buying organic dairy, too, considering the volume that most families normally consume on a weekly basis.)

Other tips to minimize exposure include:

– Shopping at your local farmer’s market where organic, seasonal produce is often easy to come by.

– Participating in a Community Supported Agriculture (CSA) program; you pay the farmer ahead of time and reap the benefits every week throughout the growing season.  Many CSAs grow organically.

– Getting in the habit of washing your produce in cool, running water right before you eat, cut or cook it.  This advice comes straight from the Food and Drug Administration.  (I read once that even if you aren’t worried about removing pesticides, consider that most pieces of vegetables and fruit have been touched by as many as 30 hands before you reach out and grab it to put in your cart.  Ick.)

I know this is a contentious and complex issue for many.  Farmers can often feel like they have no choice but to spray to protect their crops and their livelihoods.  But, for me this was just another reminder to be conscious of where my food really comes from and reinforced my commitment to buy organic when I can.

Oh, one more thing.  Another tip to minimize exposure would be to watch where you’re going.

What are your thoughts on organic vs. conventional produce?

The Possibilities of Kale
5 Lessons Learned at the American Association of Diabetes Educators Conference
Eat Your Vegetables! With Fruit!
Juicing Q & A

3 thoughts on “How To Prioritize Your Organic Dollars”