A Vegetarian in Vancouver BC: Melu Juice and Health Bar 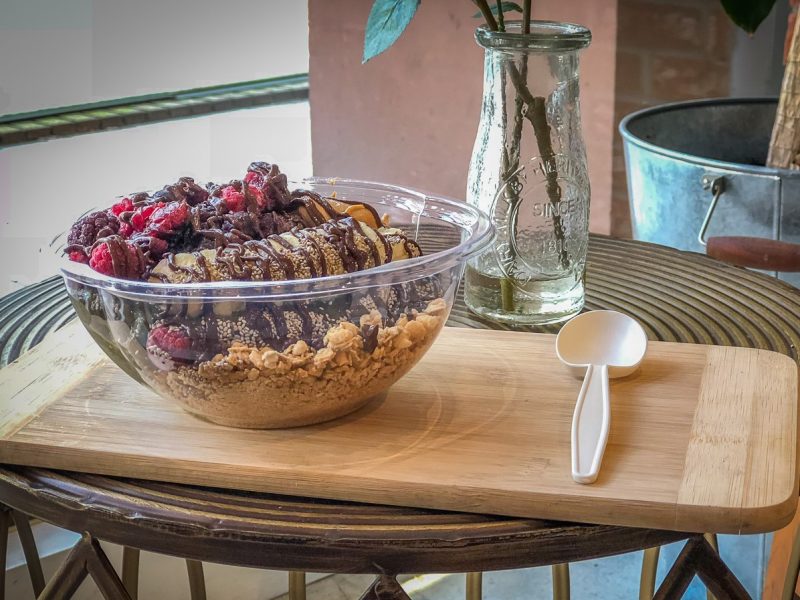 Want to improve your odds of success for eating well? Find a place that serves only healthy food and you can’t go wrong. Take your pick of menu items. Anything your heart desires is fair game, and actually good for you. No guilt, no gluttony, no regret. Just one more meal on the books where you put the right stuff in your cake hole. I’ve got to tell you, it feels good. This was the case for me on a recent trip to Vancouver BC at a darling little spot called Melu Juice and Health Bar.

Update 2020: It looks like the restaurant is currently closed. I’m not sure if it is permanent or temporary. 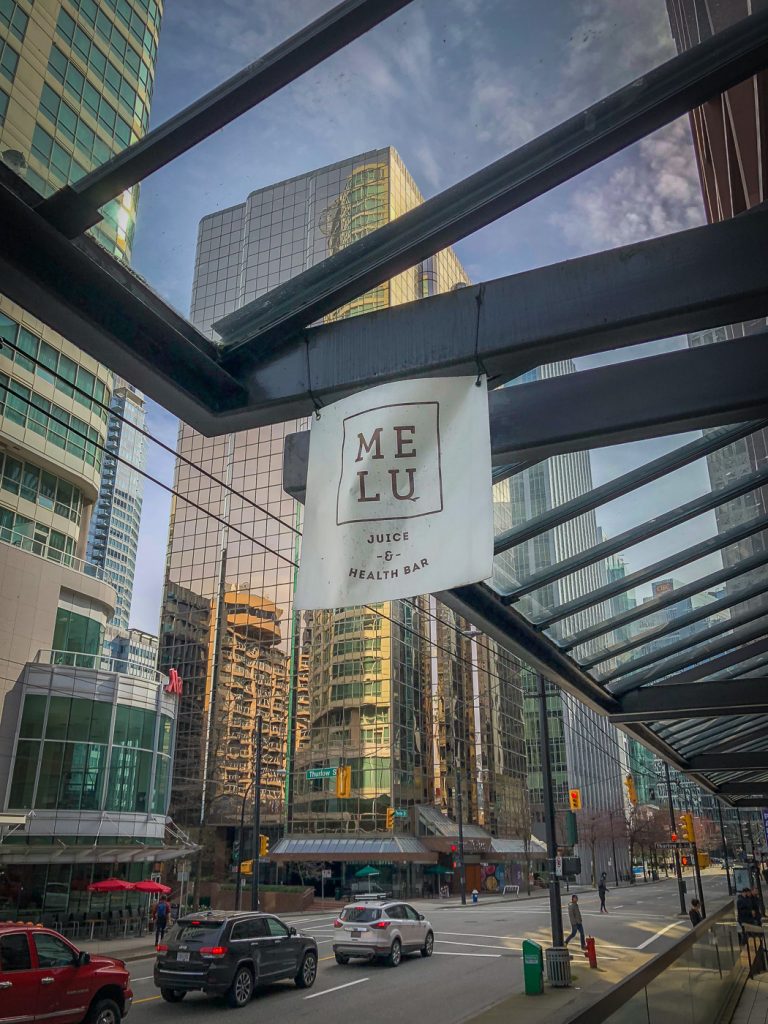 I went for breakfast and showed back up a few hours later to try a crazy-sounding latte. More about that in a minute. After staring at the menu for an embarrassingly long time, I chose the Mint Cacao Kapow smoothie but ordered it as a smoothie bowl which meant it was thick enough to eat with a spoon and covered with all kinds of tasty toppings. Here’s the menu description: 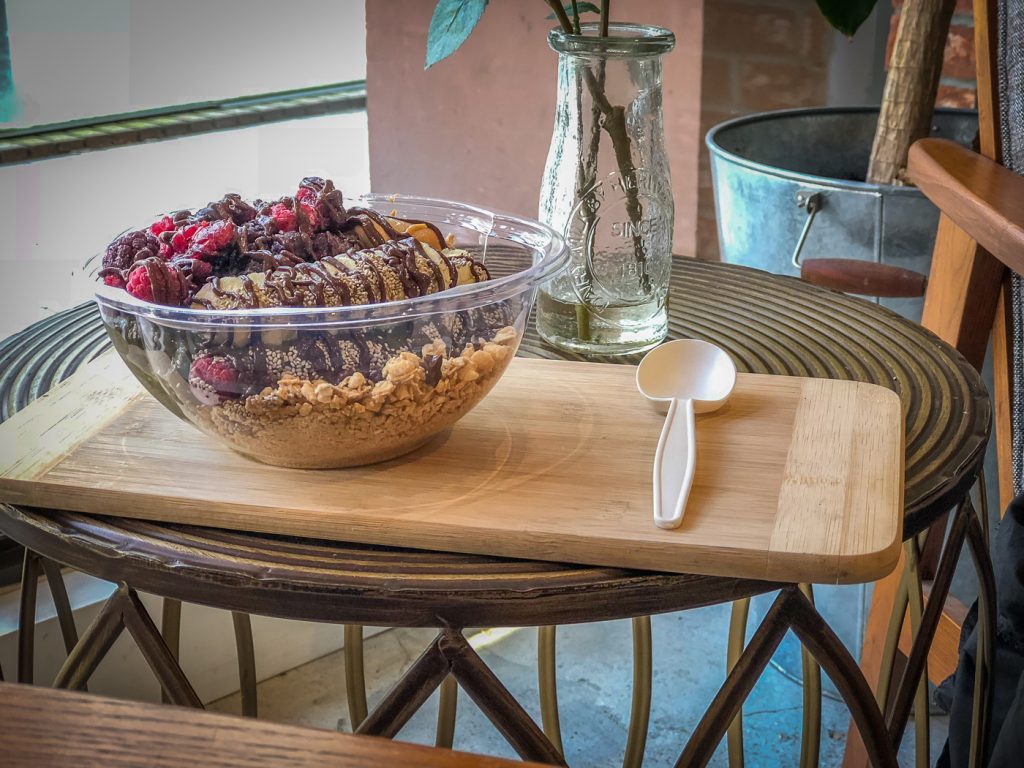 They covered this smoothie concoction with sliced banana, frozen berries, granola, chia seed, dried cranberries, a big dollop of peanut butter, and house-made cacao sauce. I’m a sucker for texture and this bowl knocked it out of the park. Each icy spoonful was a mix of crunch and chew and soft. The cacao sauce was unbelievably smooth and chocolatey. I’m so curious how they made it. Coconut milk? Cashew cream? Either way it’s a winning recipe. 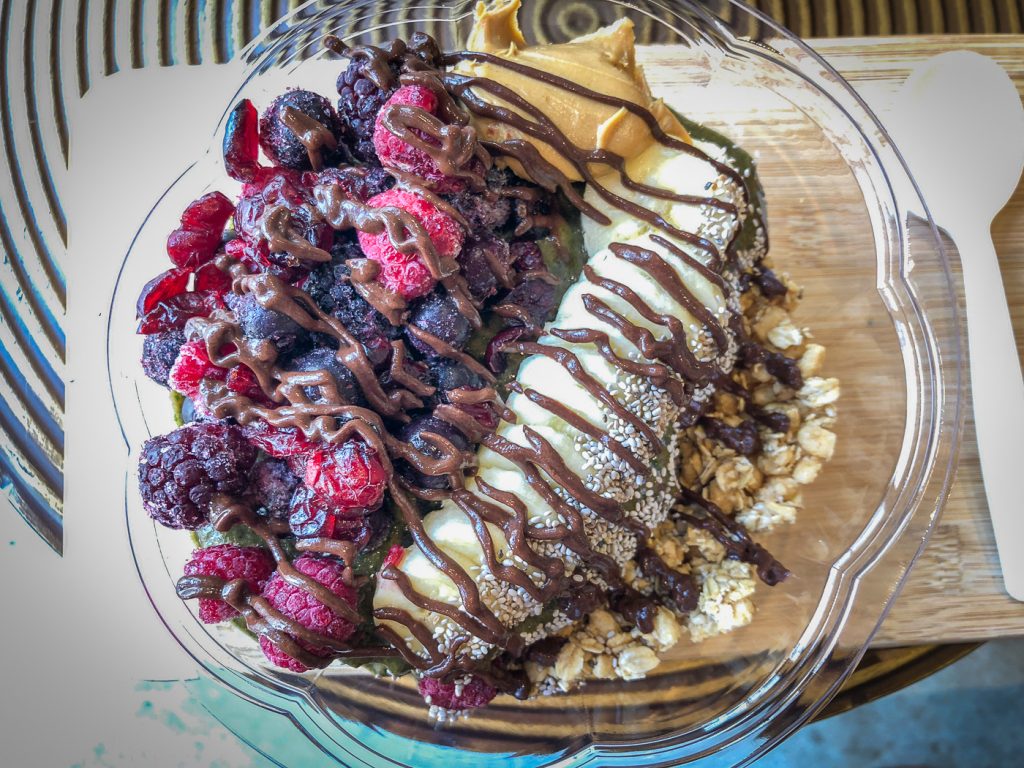 Let’s be honest here: the portion was gigantic. As much as I like finishing things (bowls of food, my to do list, a good book) I couldn’t get to the bottom of this one. I ate about 2/3 and then surrendered.

The smoothie itself was really mild and seemed to be lacking acid. The mint flavor was incredibly subtle, almost hard to pick up, but I was still so content because the toppings made the meal. I really have to start making smoothie bowls at home. They’re versatile and delicious and I’m constantly inspired by the photos of them on Instagram. But for me, visual appeal isn’t a priority so much as complete and total yumminess.

After my extravagant smoothie bowl breakfast, I headed out to get some steps, do a little window shopping, and soak up some Vancouver sunshine. But a couple of hours later, I found myself back at Melu. And yes, I was embarrassed to be a repeat customer again so soon, but apparently not embarrassed enough to stay away.

I had been drawn to a coffee drink I’d never seen on a menu before: Nut Butter Latte. Melu doesn’t have decaf, which is typically what I order, so I asked for just a single shot instead of the standard double. The flavors were complex and, as expected, it was awfully rich. Unfortunately, the peanut butter kept sinking to the bottom and I had to continually stir and shake and shimmy my cup to get it distributed. It definitely added a pleasant creamy and nutty quality that I liked. 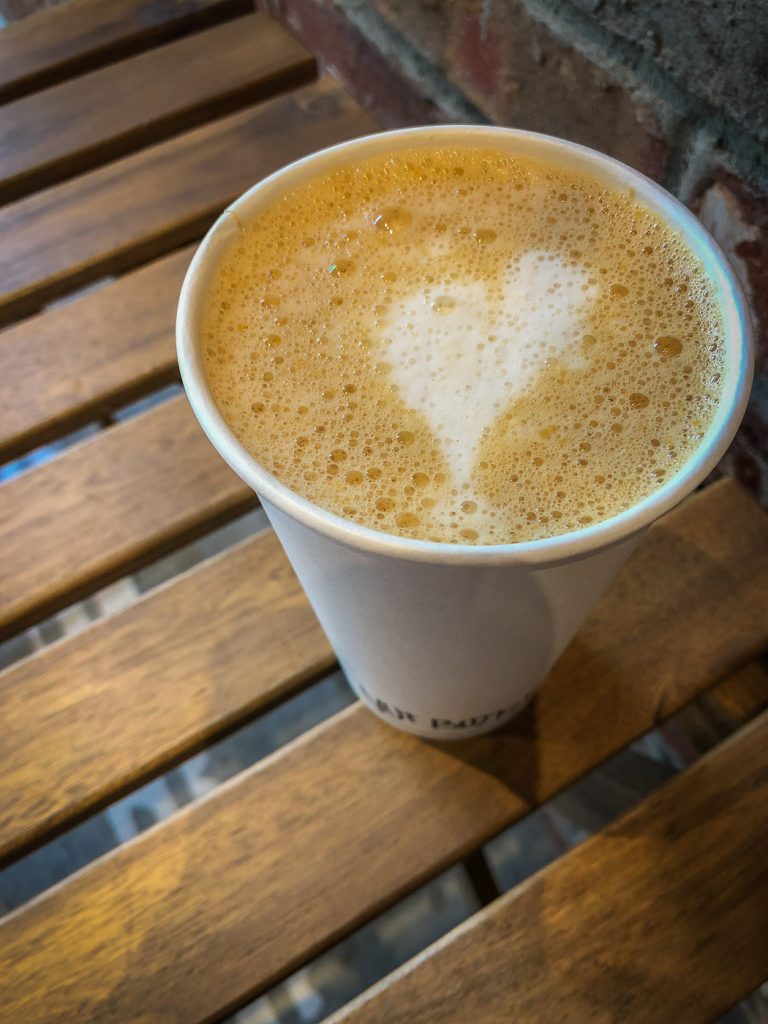 While I was sipping on my nut buttered coffee (with added coconut oil), I was thinking of the craziness that is bulletproof coffee. I’m sure you’ve heard of it. People are putting pure fat in their coffee thinking it’s good for their mental clarity and might even somehow boost their metabolism. I don’t put any stock in the claims, and I feel sure it’s a passing trend, but I suppose it’s a novel, and possibly useful, idea to add stuff to your coffee besides the standard cream and sugar.

Coffee or espresso is a tasty vehicle that people like to drink that could be made more nutritious with the right stir-ins I suppose. There’s not much added nutrition when you melt butter or coconut oil into your coffee, but peanut butter? Now that’s another story entirely. Protein. Iron. Fiber. Not to mention it provides healthy unsaturated fat (typically liquid) instead of the more harmful saturated fat (typically solid) which you get in spades with butter or coconut oil. Now that’s a trend I can get behind. 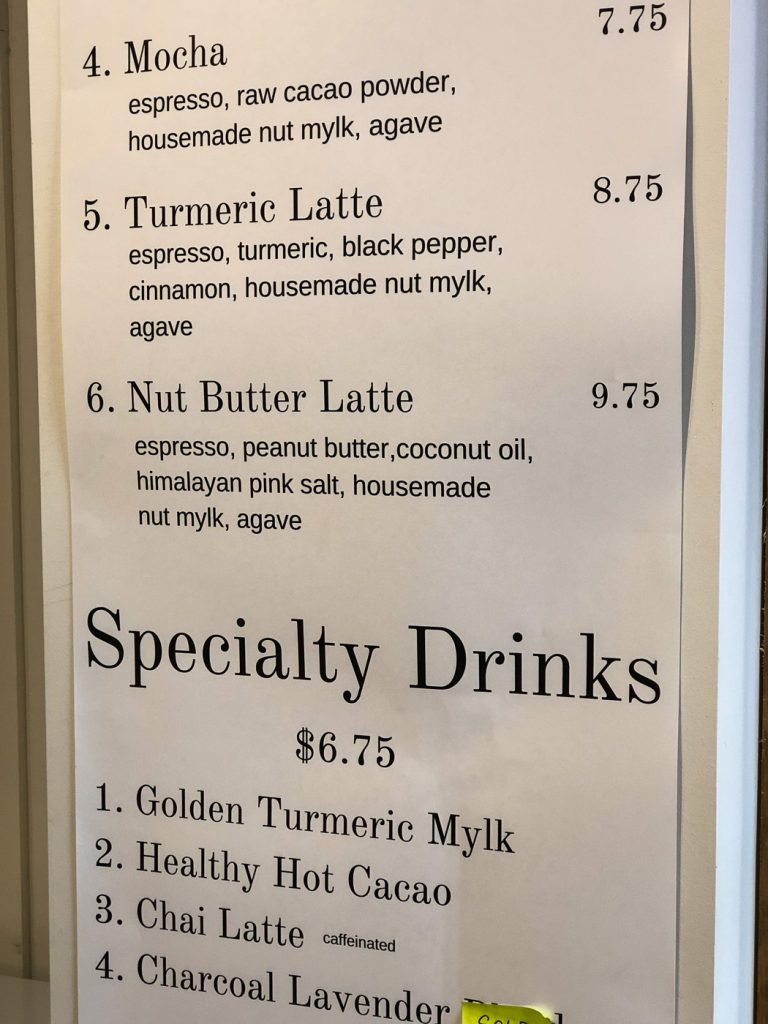 Let’s talk about the price. I know, I know. $9.75. But that’s Canadian, so it’s really $7.73 USD. How does that compare? Well, one of my standard orders at Starbucks is a venti soy flat white which runs me $6.00. This doesn’t mean it makes sense to spend $6 or $7 dollars for one cup of creamy brown liquid, it just means I’m desensitized to the ridiculousness of the prices no matter what country I’m in. 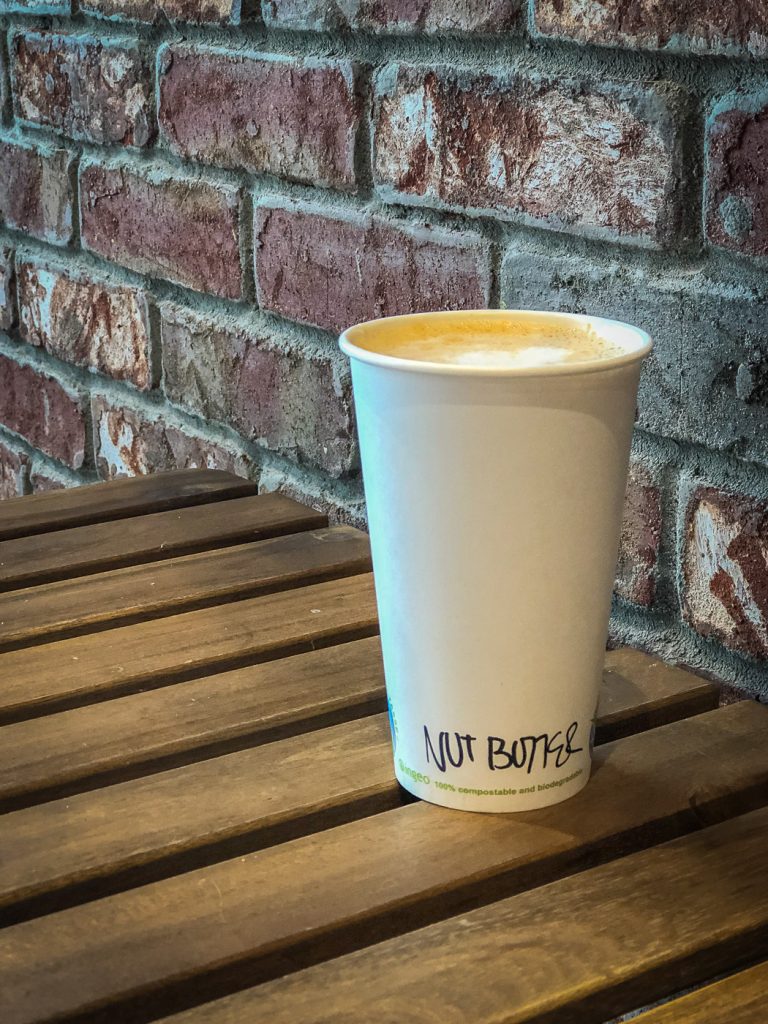 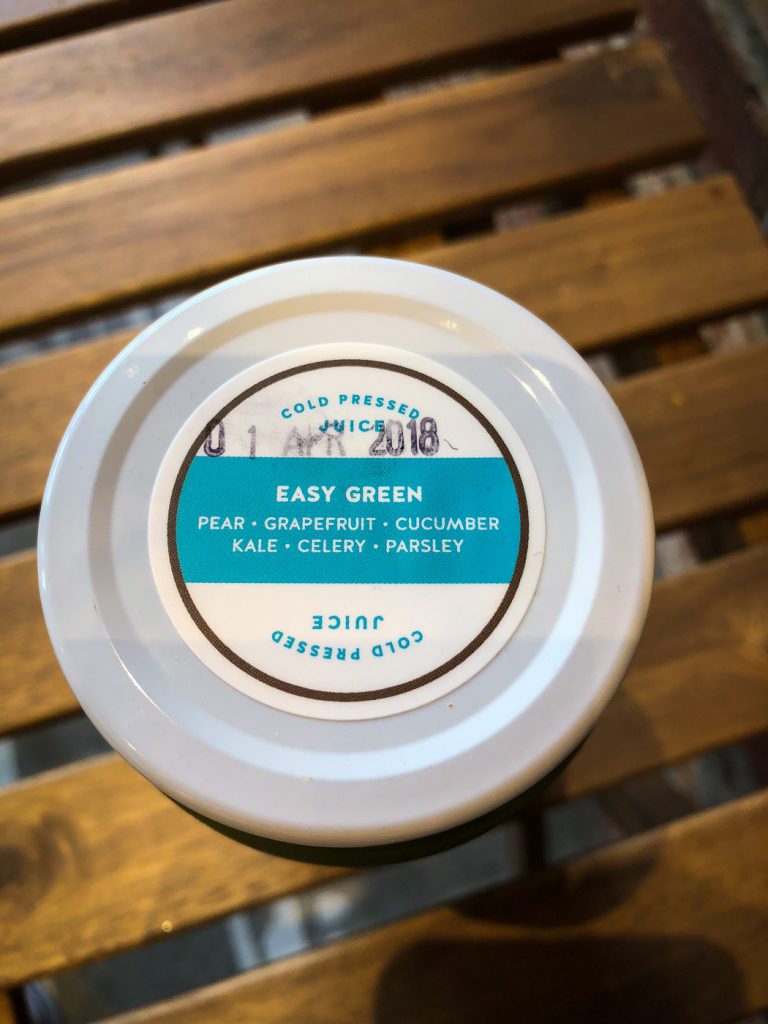 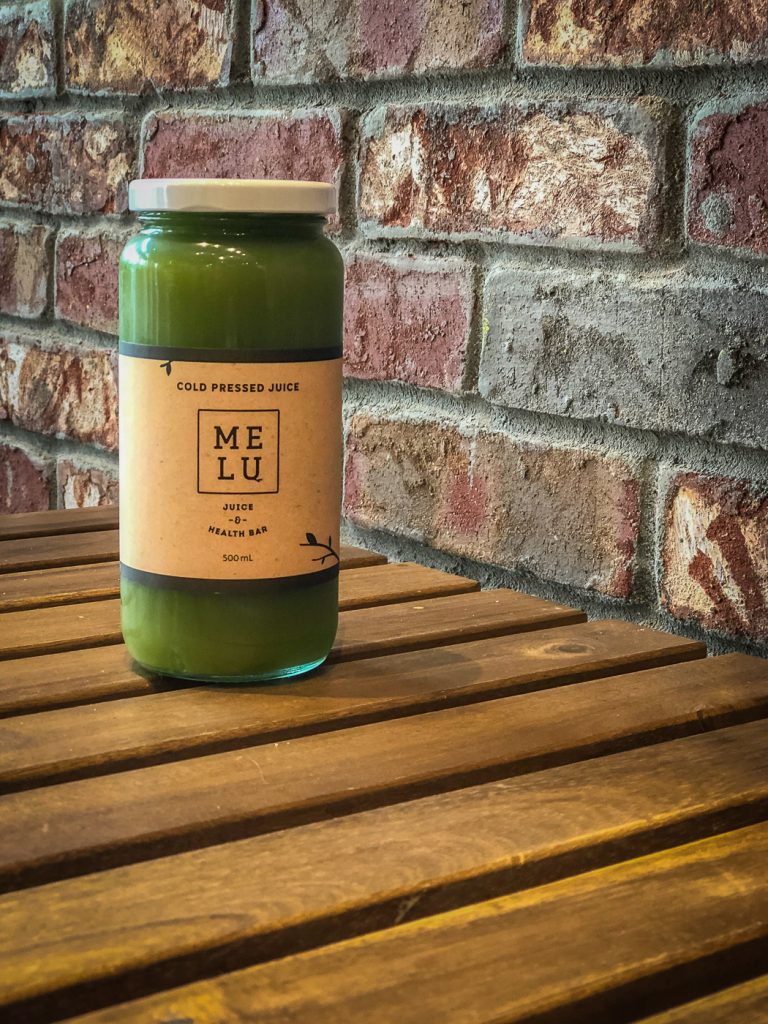 Two visits to Melu in one day simply wasn’t enough. There is more I want to try. As a recent convert to the lusciousness that is chia pudding, I’m curious to try their Mango Chia Lassi or Island Bliss flavors. The display case also showed off something called health bars (Kind of a Fig Deal or Peach Cheezecake!) that I’d like to sample on my next trip.

As I was driving home I was wishing Bellingham had a place like Melu where the entire menu was reasonably nutritionally sound and allowed for uninhibited ordering. Not soon after, I saw a post on Facebook that Big Love Juice had just come to my town. I got there as quickly as I could (about a week later) and was beyond delighted. The menu is extensive, plant-based, fresh, and full of whole grains, nuts, vegetables, and fruits. I think my wish has come true!

I can barely wait to write a post on Big Love Juice. Do you have a spot in your town that lets you order freely, knowing you’ll get a nutritious meal no matter what?

3 thoughts on “A Vegetarian in Vancouver BC: Melu Juice and Health Bar”