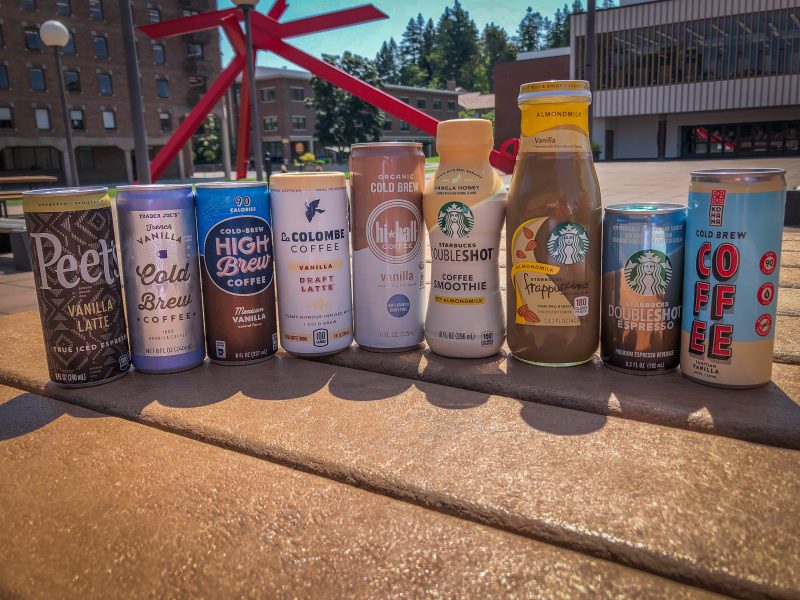 You know the birds of a feather saying? Well, I have found my flock. And they’re food nerds. Two of my friends and I recently had a blind tasting of 9 different bottled and canned iced coffees and cold brews, you know, just for fun. We purchased several variations, but mostly they were lower calorie vanilla flavored coffees. The reason we did it exposes our food-related ridiculousness but also shows how similar we are. 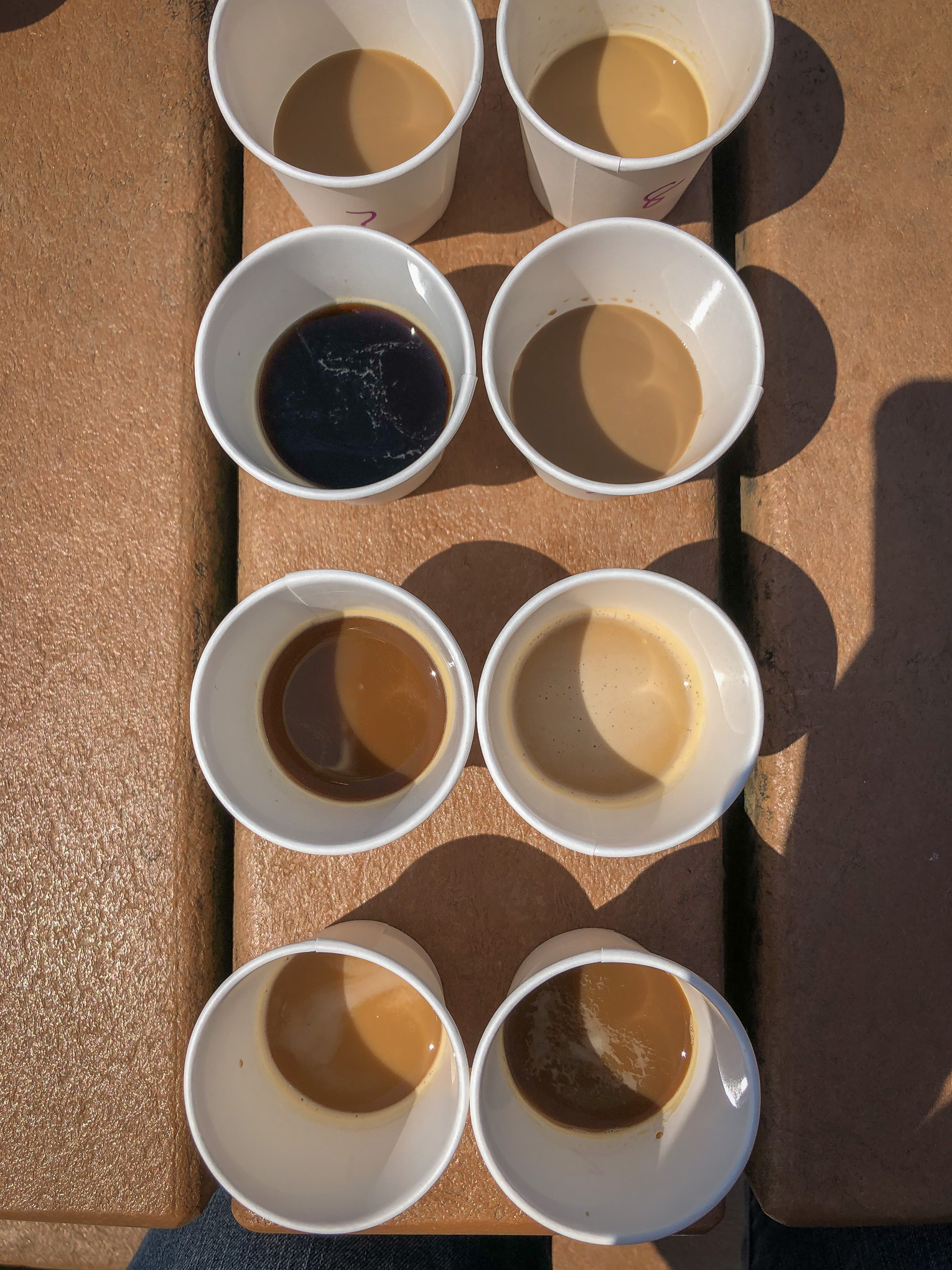 A few weeks ago one of my friends was lamenting to the flock that Starbucks was no longer selling her favorite lower calorie bottled product: Frappuccino Vanilla Light Chilled Coffee Drink. At just 100 calories for 9.5 ounces, it felt like an indulgent treat that didn’t dent the calorie budget too badly. Soon after that conversation I was wandering the aisles at the Grocery Outlet and saw a can of Peet’s Vanilla Latte. I thought it might possibly be a reasonable replacement for her, so I tossed it in the cart. Then, I got kind of overly excited about the idea of finding something similar for her, so I kept my eye out on other shopping errands in the next week or so and ended up grabbing one at Trader Joe’s, one at the Food Co-op, and a couple at Walmart.

About a week later, the third member of the flock texted me out of the blue and said she was pretty sure she’d found the discontinued drink in question at Target. At least their website said they had it, so there was a bit of hope. She was texting me to confirm that she’d found the right one, but had been buying and trying replacements herself in the meantime. I couldn’t believe it. We were each trying to solve our friend’s coffee crisis on our own, and may I note, she didn’t ask us to! Such. Nerds. Upon this discovery, we decided it was imperative that we schedule a blind taste test to end the search scientifically with all three of us together. I figured the results might be interesting to the rest of you, so am sharing them today. 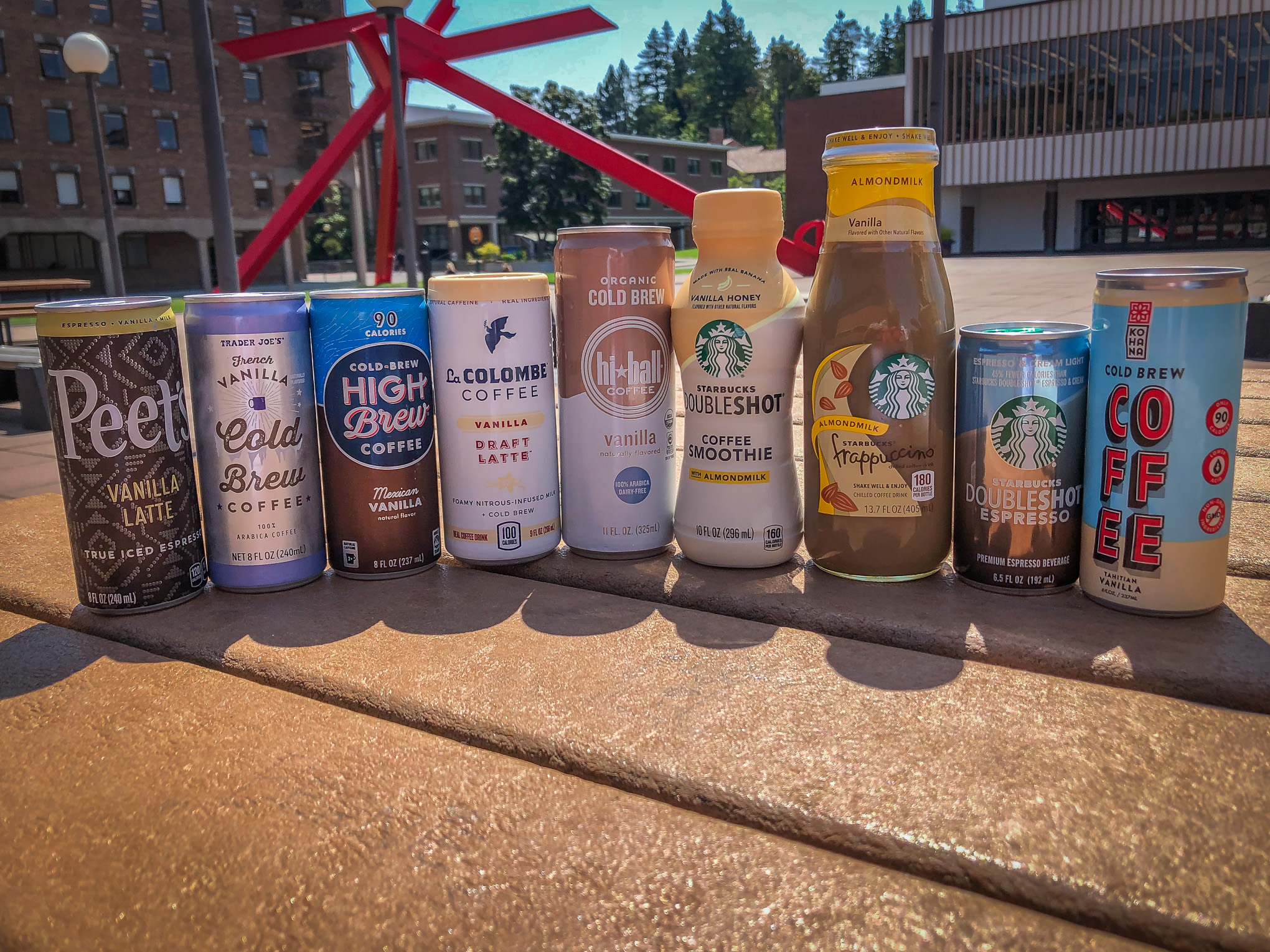 (Unfortunately, it turned out that Target had the discontinued Starbucks product on the website, but not on the shelves. So it really is gone gone. At least the single serve size is. We later discovered Starbucks Skinny Vanilla Latte Iced Espresso Classic in a 48 ounce bottle at Target and Safeway. While it may contain a similar product as the original, it’s not quite as convenient and portable in a massive jug.)

After sampling 9 similar bottled and canned coffees, we found three that fit the bill nicely. I guess I shouldn’t be surprised that all three of us chose the same three favorites, but it means I feel quite confident pointing you towards these cans of caffeine as the tastiest: 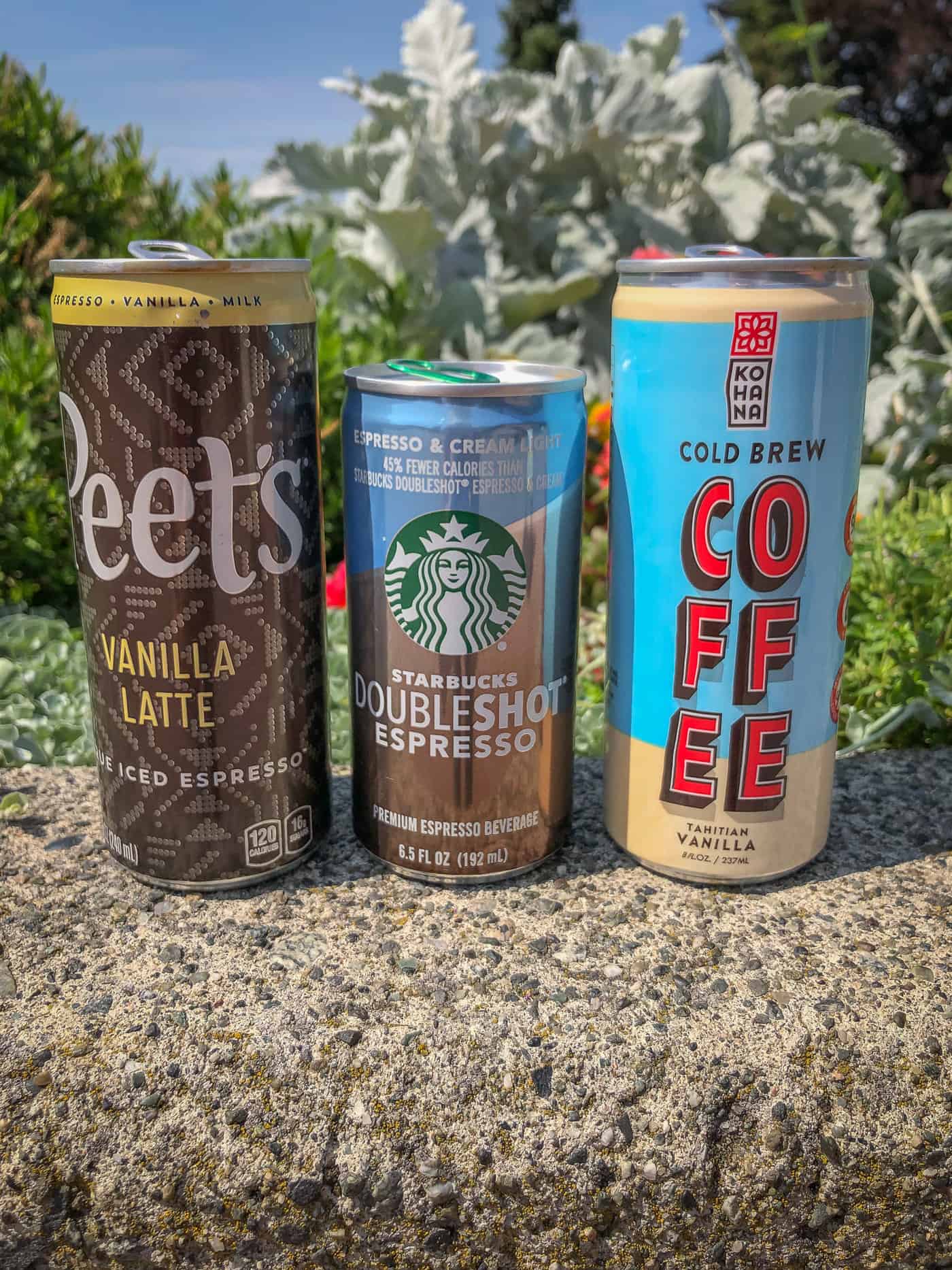 There are differences among them, of course, but we felt all three of these were something we’d drink again. They all had just what we were looking for with a pleasing, non-bitter coffee flavor balanced with a touch of creaminess and sweetness.

So which one should you pick? It kind of depends on your priorities. Starbucks and Kohana were lower in calories because they both contained artificial sweeteners like erythritol or Splenda, but Peet’s used regular sugar. If your focus is protein, Starbucks had 3 g, Kohana has 4 g, and Peet’s has 5 g. They’re all made with milk so they offer up about 10-15% of the Daily Value for calcium. 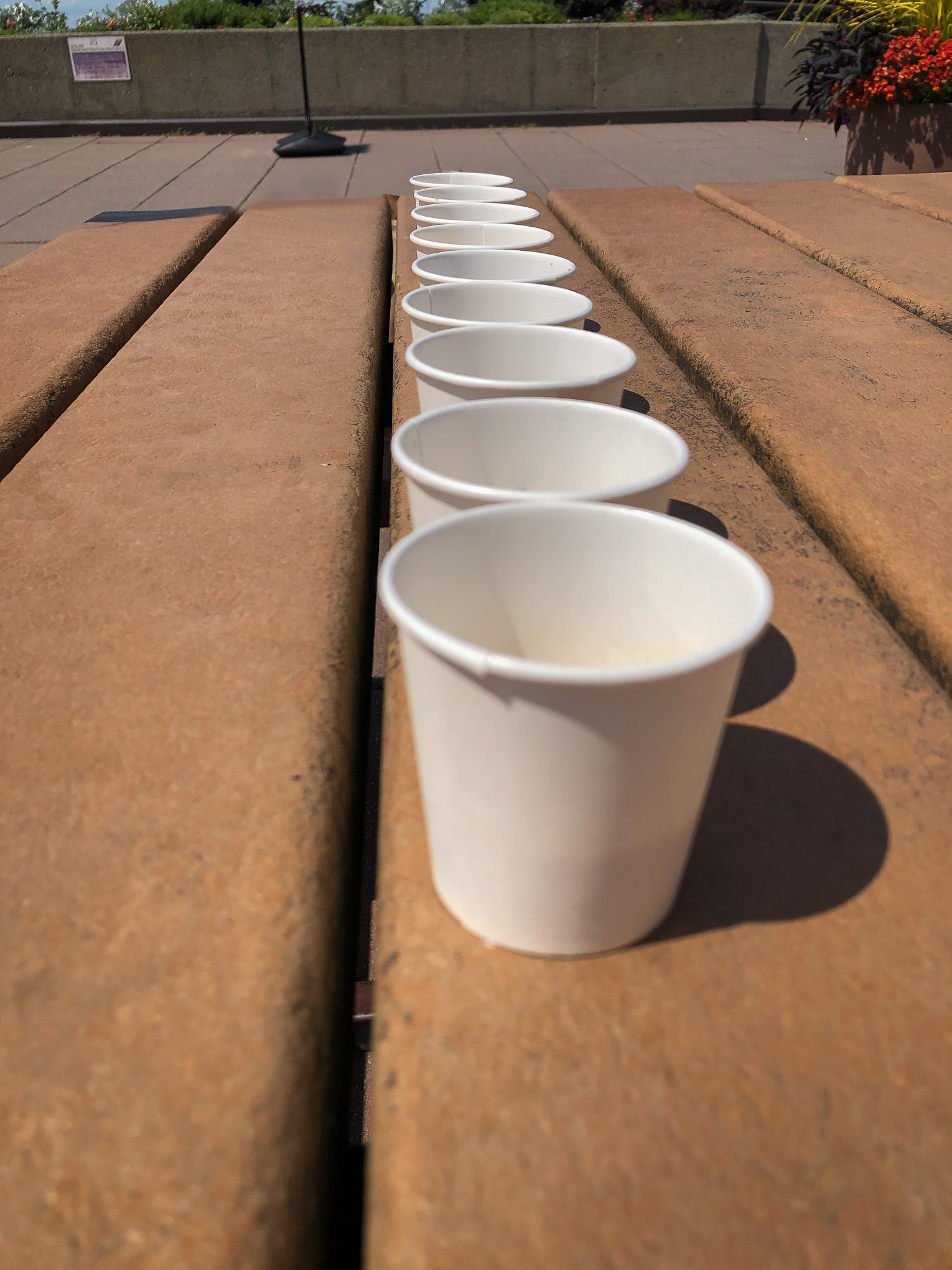 Here are the ones that didn’t get rated as highly, in no particular order:

La Colombe Coffee Vanilla Draft Latte: Near the bottom of the pack, tasting more like milk than coffee

Hi-Ball Coffee Vanilla Organic Cold Brew: Just coffee and sugar, without milk (Weirdly, I can’t for the life of me find a link for this product, so maybe it’s next on the discontinued chopping block…)

Starbucks Doubleshot Vanilla Honey Coffee Smoothie with Almond Milk: The oddball in the taste test, not just a basic coffee product but a smoothie, and you can really taste the banana

These products are all slightly different nutritionally as well. Depending on your goals, it pays to read the nutrition facts label and ingredient list. Some have thickeners like acacia fiber or pectin, some have added vitamins like vitamin D, and the calories range from 60-180 per container. Protein is anywhere from 0-8 g per container, and the ones that opt to list caffeine show a range of 100-150 mg. In case you’re wondering, less than 300 mg of caffeine a day is typically considered a moderate intake, and manufacturers aren’t required to list it on the label since it’s not a nutrient. Some just do it voluntarily. 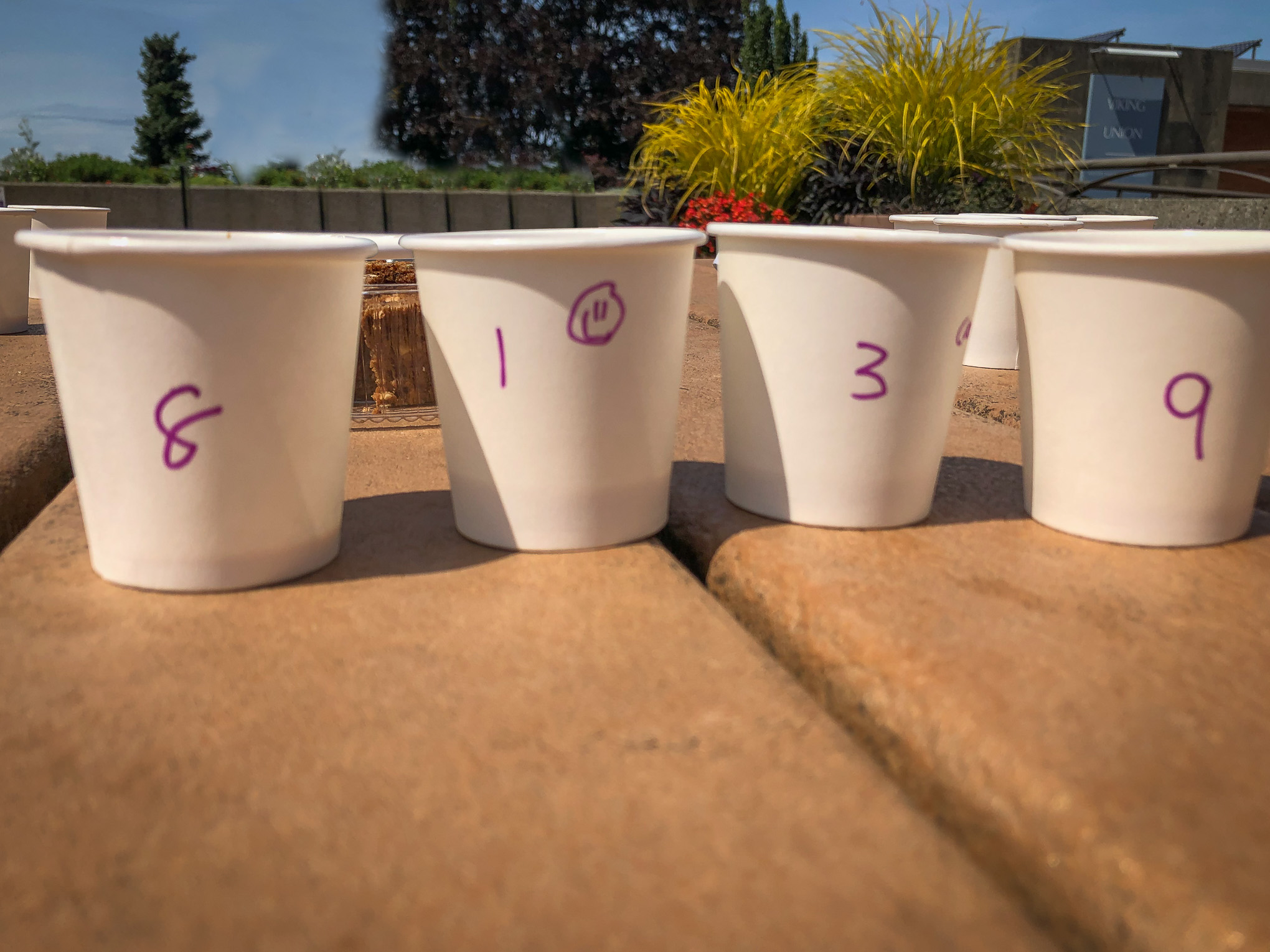 What a fun endeavor this was. Partly it was the sweet sipping, partly it was the sunshine and the picnic-like feel, but mostly it was the company. I suppose it was also a bit embarrassing. I have to tell you, we attracted some attention. Three laughing women, seated at a table in a public place, with 27 numbered paper cups on the table, and lots of audible “oohs” and “ahhs.” A gentleman actually walked over to our table, after curiously watching me crack open 9 cans of coffee in a row, and said, “I have to ask. What are you doing?” And we were just nerdy (and proud?) enough to tell him!

This is not a sponsored post. We bought all these products ourselves to have a nerdy coffee party and didn’t receive any free samples.